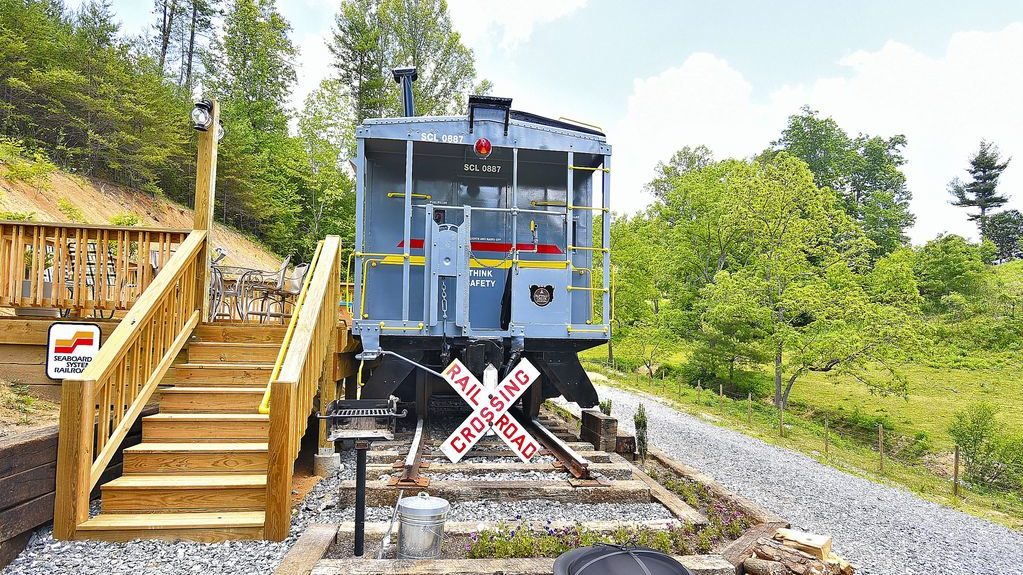 While the golden age of rail travel is long in the past, retired boxcars and cabooses haven’t entirely lost their steam. Trains, it seems, are enjoying second acts as they’re being renovated and converted into hotel rooms, bed and breakfasts and vacation rentals.

All aboard for a unique getaway? Here are 11 North American accommodations to suit train lovers!

Guests here can sleep in original 1920s Pullman train cars that have been stopped on their original tracks. Don’t fret; the “ghost people” figures throughout the Crowne Plaza at Historic Union Station are friendly — these fiberglass-coated mannequins mimic what life was like more than a century ago in Union Station. And here’s a fun tidbit of hotel trivia: Thomas Edison once worked as a telegraph operator at the station but skipped town after he was fired (for conducting too many useless experiments on the job).

This charming blue caboose on VRBO excels in the “unique” department thanks to its location on a 65-acre bison ranch. Waking up early comes with perks like catching a sunrise over the Smoky Mountains and watching the buffalo herd come in for breakfast oats. An on-site playground in the woods means built-in entertainment for the kids, and includes horseshoes, a mini zip-line, swings and a teeter-totter.

Train travel once thrived in Chattanooga, with the Tennessee city boasting the largest terminal in the United States from 1909 to 1970. The city’s main terminal has been transformed into the Chattanooga Choo Choo Hotel, with renovated Pullman cars in the heart of an entertainment district. Plus, there’s a train-themed escape room, and the theme is “runaway rail car.”

Slumber in a train boxcar at the Northern Rail Traincar Inn, which is perched on the northern shore of Lake Superior, about 35 minutes north of Duluth. Guests can pick from guest rooms inside half of a train boxcar or three full car suites including “Victorian,” “Safari” and “Lighthouse.”

Leave the tent at home and opt instead for a cheery yellow caboose at Two Rivers State Recreation Area in Waterloo, Nebraska. The park has 10 historic Union Pacific cabooses that have been converted into lodging and can sleep up to six people each. They are available to rent from mid-April to September each year.

Travel back in time to 1919 in this vintage caboose that features wooden bunks and leather cushions. The Chester, Massachusetts train rental, which is available on Glamping Hub, is near a scenic hiking trail and a town with cute shops and seasonal festivals. Can you just imagine this New England escape in autumn, with the fall foliage providing the scenery? Swoon!

Rates start at about $67 per night.

7. A Converted Caboose In The Redwoods Near Cupertino, California

A restored, cherry red caboose that’s listed on VRBO is tucked away within Northern California redwoods, which makes for a unique escape just 20 minutes away from Silicon Valley. Adding an extra dose of vintage charm is an elegant clawfoot tub inside the 1940s-era Southern Pacific caboose-turned-vacation rental.

Whirlpools, saunas, fireplaces and wet bars are stand-out amenities in some of the train car rentals at Whistle Stop Bed and Breakfast, and they help modernize the grandeur associated with bygone-era train travel. The mahogany-paneled Palace Car, which was once a dining car used by the Northern Pacific Railroad, is especially opulent.

Train enthusiasts will especially love the Train Station Inn in Nova Scotia, Canada. Not only can you book restored boxcars and cabooses, but you have the option of staying in the former train station by booking the Stationmaster’s Suite, which served as the stationmaster’s residence a century ago. You can also have a meal in a dining car at lunch and dinner from May through October. The hotel also has a cafe, museum and gift shop.

Sitting on the edge of a lake, this scenic 900-square-foot converted caboose from the L&N Railroad is available to rent on VRBO. Guests here have access to a canoe and kayak, as well as a pier and floating dock. There’s also plenty of room to park boat trailers.

Really, it’s a choo-choo-choose-your-own adventure at this Florida Panhandle resort where you can sleep in a repurposed caboose … or a treehouse or a refurbished schoolhouse. Or you could go glamping. Katie’s Caboose, though, is a vintage micro-cottage with a wooden interior that can sleep two people. Round out your vacation with kayaking, canoeing and zip lining at the resort.

Time to plan a trip! Would you want to spend a vacation in any of these converted trains?