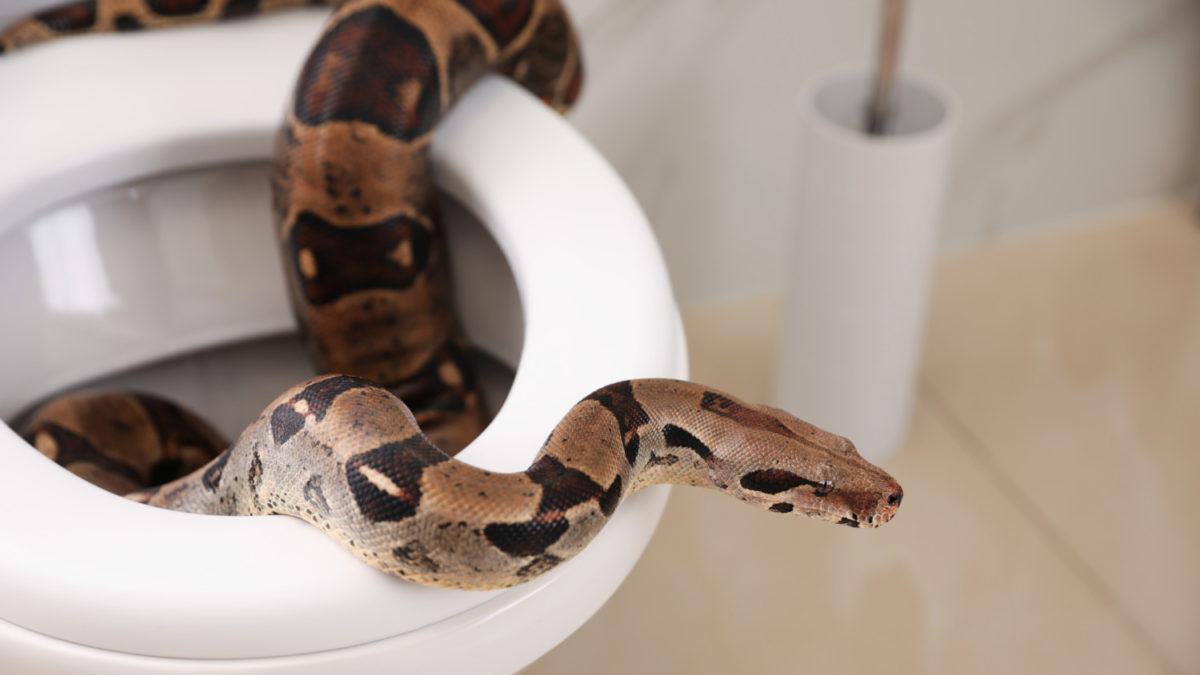 It sounds like a scene from a scary movie: You lift open your toilet to discover something creepy and crawly staring back at you. While it’s not common, creatures can make surprise cameos in your toilet and these horrific discoveries are occasionally videotaped and make their rounds on social media or the local news to everyone’s dismay.

As it turns out, pests can enter into your john via a few different routes, including through cracks in your plumbing. Snakes, for instance, can slither into the ventilation pipes on your roof that are connected to bathroom plumbing, according to Family Handyman, which is why it’s a good idea to have a rooftop vent hood.

Without trying to cause undue alarm (again, this is a rare occurrence), keep reading to learn about four creatures that are capable of crawling through your toilet, and how to stop them from doing so.

From a boa constrictor in California (likely a lost pet) to a snake poking its head out of a bowl in Texas, there are occasional news stories of people who are shocked to find these slithery reptiles in their restrooms.

It’s possible that a snake could fall or slither in from the opening of the plumbing vent stack on your roof and make its way into the waste line, according to home site Hunker. But it’s most likely the reptiles broke in through another access point (maybe an open window?) and subsequently made their way into the toilet bowl, according to National Geographic.

Still, there’s another explanation for how a snake could wiggle its way into your bathroom. Mice and rats are known to hang out in sewers, and snakes will enter the sewer looking for their next meal, explains Australia-based Gladesville Plumbing Services. From there, they can potentially make their way through a sewer and navigate the toilet’s S-bend.

If you have a septic tank, be sure the lid fits tightly and doesn’t have any cracks or other damage that leaves an entry point for snakes.

Not only can rats break into structures by gnawing, climbing or jumping, but they can also swim through sewers and enter buildings through toilets or broken drain pipes, according to the University of Missouri Extension.

Again, it’s rare to find a rat in your toilet, but given these critters carry a lot of diseases, it’s troublesome if they’re popping up in your home at all.

Should you find one in your bathroom, put the toilet lid down and place something heavy on it, according to home services company Angi, which will encourage the rat to go back towards the sewer pipes. You’ll also want to call a local pest or rodent-control specialist.

Frogs could hop into your home, fall through a vent stack or crawl through the septic tank.

But it’s also possible the amphibian got in via a break in the sewer pipe, and, as Hunker points out, if this is the case, the creature is providing you with a valuable service by alerting you to the plumbing emergency. If you have squishy ground or standing water in your yard, call a plumber, Hunker advises, because you could have a broken sewer pipe that’s causing sewage to get into the groundwater.

A squirrel? In the toilet? It’s plausible, as one woman discovered after her curious cats alerted her to the situation. While squirrels usually break in through a chimney, they, like snakes, can wind up in the bathroom after entering through ventilation pipes that are uncovered.

Beth Nabi wrote about her squirrly encounter for Tallahassee Magazine.

“We finally concurred that Toilet Squirrel had entered through an uncovered plumbing vent on the roof, found his way into a pipe, suited up in his little squirrel scuba gear and somehow made it through the closet bend and the S-trap,” she wrote.

Hopefully none of these critters show up uninvited in your bathroom, but making sure points of entry are closed off can help prevent these shocking scenarios from playing out in your restroom.