Park benches, for the most part, are utilitarian—they provide a place to sit down while you wait for a bus or give you that break you need after playing on the monkey bars and whizzing down the slide in the neighborhood park with your kids.

But, some benches are going beyond the call of duty and serve a dual purpose, doubling as public artwork. They also help reveal something about a place, reflecting the artistic character of a city, the value a community places on park space or even the design concepts of a country.

These seven beautiful benches from around the world will make you want to sit and stay awhile—and maybe snap some photos.

Around just about every corner in Santa Fe, you’ll find a surprise—bright pops of color splashed on building posts, adobe-style hotels like the luxe Inn and Spa at Loretto, and famed architecture, including the “Miraculous Staircase” in the Loretto Chapel, purportedly built by St. Joseph himself. So, it’s no surprise this famously arty city would pay special attention to even its benches. Nearby the Georgia O’Keeffe museum and outside Manitou Galleries, a row of benches are worthy of a stop after you’ve been following the city’s famed Margarita Trail. We especially love this bench with a bear so tubby he looks like he’s ready to curl up for a long winter’s nap. (Sounds good right about now, yes?)

The Finger Lakes region of New York is a place you’ll want to get out and explore by foot, from the hundred or so waterfalls in Ithaca to the lush green wineries. And, when it comes to advocating for a pedestrian lifestyle that’s good for the environment, city leaders walk the talk, so to speak. Ithaca Mayor Svante Myrick converted his prime parking space to a park space that’s outfitted with two benches and planters. The 29-year-old mayor’s converted space is a symbol that the city supports the environment and alternative transportation.

Let’s be honest: Most park benches are super uncomfortable. That’s where designers Jair Straschnow and Gitte Nygaar come in, re-imagining public spaces and adding an element of play. Their mantras? Play is good for our well-being and benches shouldn’t be rigid. So, in collaboration with Copenhagen, Denmark, they designed hammocks that can also convert into sitting benches and encourage residents and visitors to lounge around just like you would during that pre-school naptime we all wish was still part of our daily routine.

Literary lovers have plenty of reasons to flock to London. But, in 2014, the National Literacy Trust and Wild in Art gave them 50 more compelling reasons. Scattered about London was a trail of 50 book benches shaped as open books and decorated by professional artists. The public benches included tributes to “Bridget Jones’s Diary” by Helen Fielding, “The Importance of Being Earnest” by Oscar Wilde, “Great Expectations” by Charles Dickens, and “1984” by George Orwell, along with many others, including a particularly colorful Dr. Seuss-themed bench. We can’t think of a better place to curl up and read a book. After the benches were enjoyed by the public, they were sold at an auction. Bummer, we know.

5. Tulip Benches Around The World

A Netherlands design firm, Tulpi, has created colorful benches that look like tulip buds, but convert into benches. Cue the year-round spring fever! Their designs are blooming around the world, everywhere from Dubai to Poland. They’ve also made “Tulpi bins” that hide trash cans inside a much prettier flower.

Part park bench, part swing, part glow-in-the-dark nightlight, the South Boston Waterfront District is a gem of a playground. The public art installation at The Lawn on D Powered by Citizen’s Bank includes interactive swings, lit up with an internal LED lighting system, that glow when you move. It was designed by Höweler + Yoon Architecture. The Lawn on D is owned by the Massachusetts Convention Center Authority. It’s a gathering place for special events like concerts, but also is just a cool hang-out, with a bocce ball court, cornhole, ping pong and a giant Jenga set. Adults need playgrounds, too, right?

7. An Observation Deck In Vöcklabruck, Austria

Here’s a riddle: You’re chest-deep in water, but you’re not wet. How? The Vöcklabruck, Austria, observation deck has a trail that leads into a pond, with a sunken observation deck in the middle of the water. From there, you can look out at the water and pose for a cool photo opp. 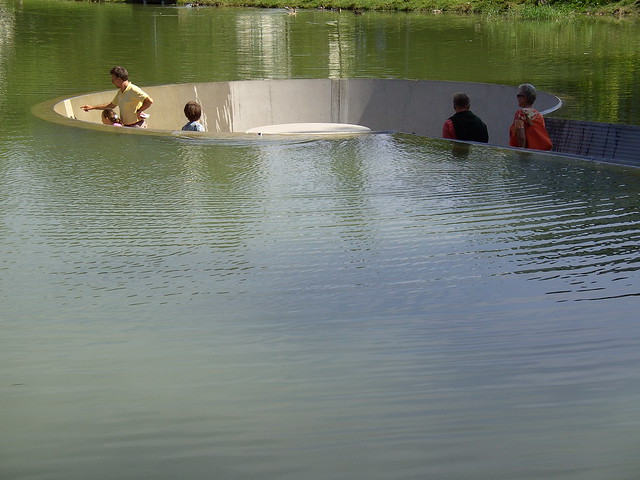