In case you missed it while you were still obsessing over the “Game of Thrones” finale, the final trailer for “Toy Story 4” was just released (you can watch it below). That’s right, the fourth and possibly final installment in the franchise that began in 1995 with Pixar’s seminal Toy Story, the world’s first computer-animated feature, comes out on June 21, and parents who grew up with Woody and Buzz and the gang will now be bringing their own children to see the film.

Last week at Pixar Animation Studios in Emeryville, California, I screened 32 minutes of the film and sat down with the filmmakers to learn more about the incredible team and process that went into creating this stunning, generation-bridging movie.

Quite simply, this is one you can’t miss. Here’s why.

1. Key And Peele Voice Two Of The Films New Characters, And They Are Absolutely Hilarious

Powerhouse comedy duo Keegan-Michael Key and Jordan Peele team up to voice Ducky and Bunny, two carnival prize plushes of the impossible-to-win variety that have been hanging out on the prize wall for way too long. When Buzz Lightyear finds himself “tied up” with them, that’s their cue to have some fun at poor Buzz’s expense, and it’s hysterical.

Key recently shared his own response to seeing the finished product: “I laughed, I cried, I was inspired … I’ve seen them all. I know I’m partial. It’s my favorite.”

2. Bo Peep Is Back After 19 Years, And We’re Loving Her Transformation

After a 19-year absence, Bo Peep makes a triumphant return to “Toy Story 4.” Despite only clocking about seven total minutes in the first two films, Bo steps into the spotlight as a major character who has taken charge of her destiny.

The creative team behind Bo’s new look shared how she’s changed since we last saw her. Tough, but also caring, Bo’s been through a lot. She’s mature and independent now, but still the same Bo. Her animators wanted to give her more of an edge and celebrate her athleticism, while at the same time maintaining her femininity. She’s reworked her dress into a more functional jumpsuit and cape ensemble and she brandishes her staff more like a martial artist than a shepherdess. In short, we can’t wait to see where this story takes her.

3. A Significant Portion Of The Film’s Plot Revolves Around A Spork

You’ve probably seen promotional visuals by now of Forky, the lovably clueless and insecure new “toy” Bonnie crafts from items that came from the trash on her first day of kindergarten. Parents will find the inspiration behind Forky’s creation particularly amusing.

Director Josh Cooley and producers Jonas Rivera and Mark Nielsen are all parents themselves and took inspiration for Forky from the way that their kids (and, let’s face it, every toddler on earth), make inexplicable choices when it comes to toy preference—like being far more interested in the box a toy came in than the toy itself.

Brilliantly voiced by Tony Hale, best known for his portrayal of Buster Bluth on “Arrested Development” and Gary Walsh on “Veep,” Forky is sure to become a new fan favorite.

Let me be a bit more specific: There’s a Canadian Evel Knievel-style character in the film whose name is Duke Caboom, his logo is an exploding maple leaf, and he’s voiced by Keanu Reeves.

Seriously—you can’t possibly need me to say more to sell you on this one. But here’s another fun fact: Cooley shared that when casting actors for the film, they prefer to listen to voices without knowing who the actors are. When casting presented Canadian voices for Duke Caboom, Cooley said that they heard Reeves’ voice and said, “That’s perfect! Who is that?” He admitted they had no idea Keanu was Canadian.

5. The Film Contains The Most Easter Eggs Ever In A Pixar Film

“Toy Story 4” features most complicated set in Pixar history—the Second Chance Antiques Mall, containing over 10,000 items, and the team shared with us that there’s pretty much an Easter egg in every shot in the mall. They comfortably estimated that there are hundreds of Easter eggs in this film, and that people will probably continue to find them for years.

A few to get you going: Look out for Riley’s Dad from “Inside Out” doubling as a conquistador, the Tiki masks from the fish tank in “Finding Nemo,” and Dug from “Up” playing poker.

6. The Animation Technology In This Film Is The Best You’ve Ever Seen

With details like specks of dust floating through the air in the antiques mall, over 30,000 lights illuminating an unbelievably lifelike nighttime carnival scene, and a super-intense stage-setting rainstorm to kick the film off, this is a level of detail you’ve not yet seen in an animated movie. The filmmakers thought of literally everything, sparing no amount of time or expense to ensure everything was as realistic and believable as possible. 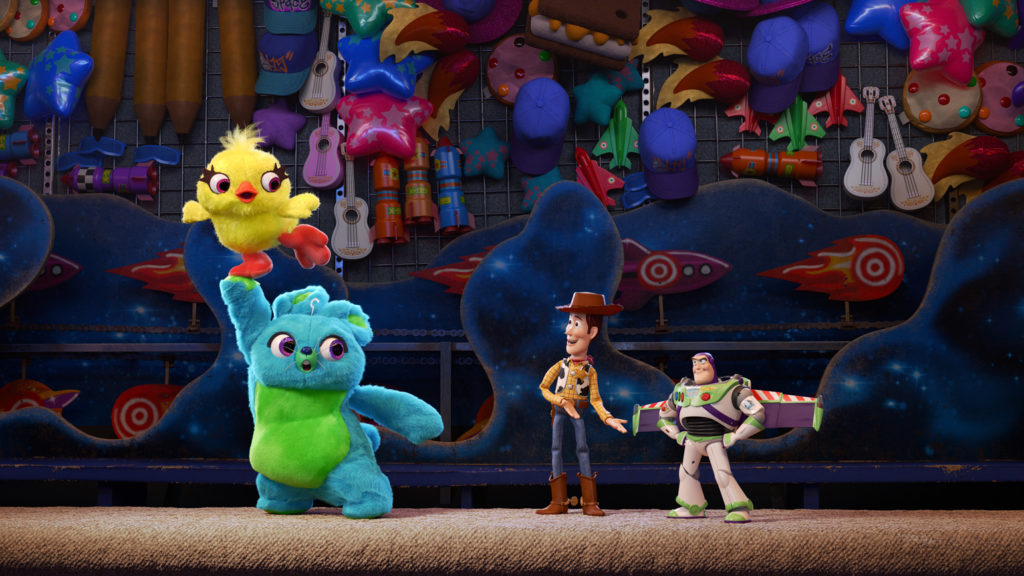 7. Parts Of It Are Super Creepy—In The Most Fun Way

The film’s villain is an old-timey doll named Gabby Gabby (voiced by Christina Hendricks), and she is flanked by a crew of silent henchmen, a troupe of ventriloquist dummies. Producer Mark Nielsen calls the dummies “by far, some of the creepiest characters we’ve ever created.” Fun fact: Woody was originally created to be a ventriloquist doll himself!

8. This Could Be The Last ‘Toy Story’ Film Ever

Cue the waterworks! While the filmmakers didn’t slam the door completely on any future Toy Story films, Cooley did say that “it could be the completion of Woody’s story.” Whether this is the end or not — Nielsen pointed out that he and Rivera thought the films were done at the end of “Toy Story 2” — Rivera said, “I feel satisfied with the ending of this one. I feel like if there’s never another ‘Toy Story,’ I feel like that’s ‘Toy Story.’”

We’re not going to say there should be an “Endgame“-level spoiler ban imposed, but if you’ve been a fan of the franchise for the last 24 years, you might want to buy your tickets for opening weekend.

Watch the final trailer below: