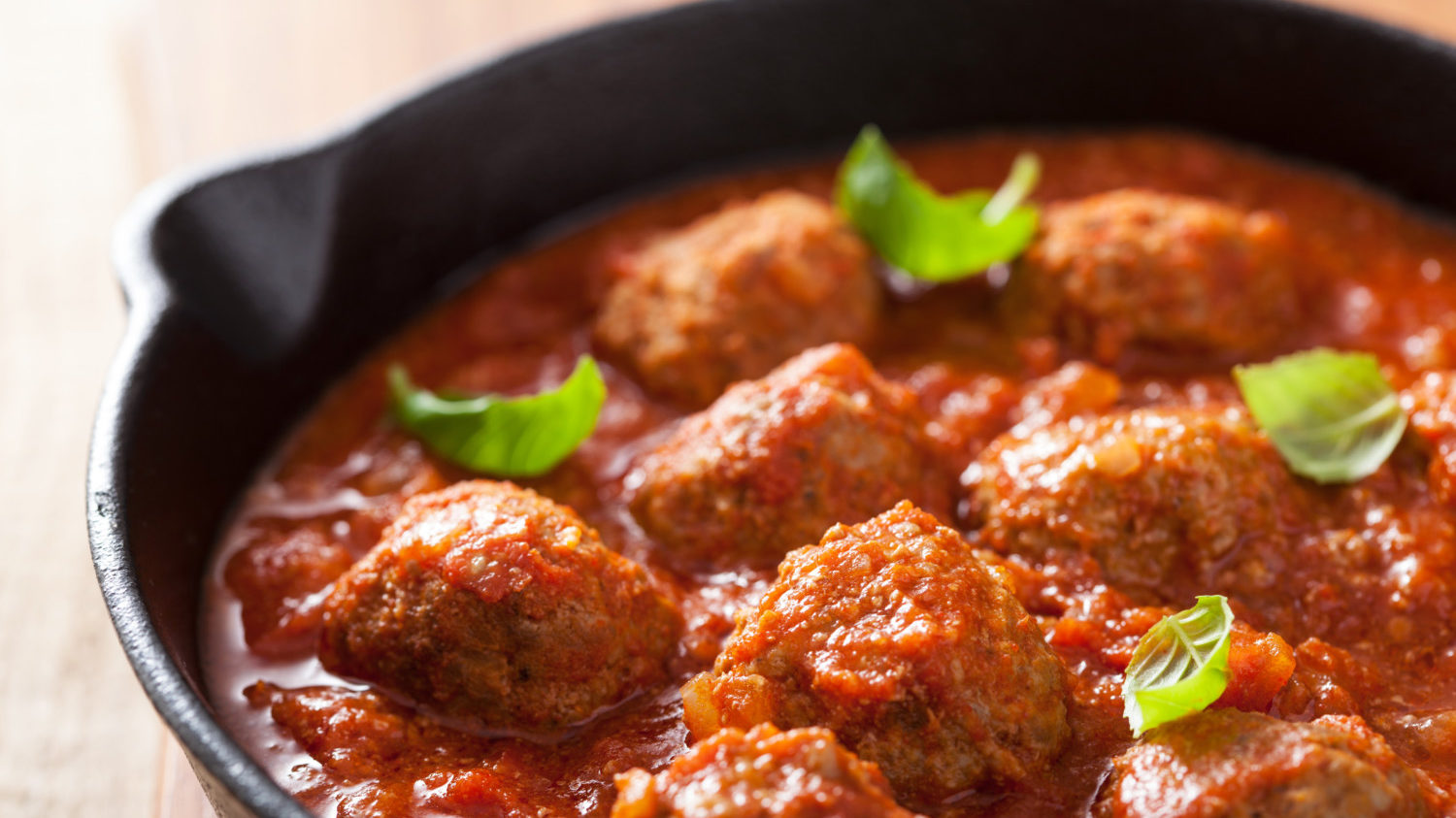 Bacon. Bourbon. Meatballs. No, you aren’t having a wine-induced fever dream. These are real. These are awesome.

Luckily, making these tasty meatballs is fairly simple. Even the barbeque bourbon sauce comes together quickly.

You don’t even need to precook the bacon. It cooks right inside the meatball. Simply take the bacon (any kind will do, but we advise that you go for hickory-smoked to complement the barbecue sauce) and onion and pulse it in a food processor. You want the bacon to be finely ground.

Then, add in the breadcrumbs. Again, personal preference reigns supreme here. You can buy fine breadcrumbs from the store, or you can make your own with any stale bread you have around the house.

Now it’s time to add the beef. Alternately, you can use pork or lamb, or a mixture of all three. According to The Kitchn, using a different variety of ground meats will make the yummiest meatballs. We also have a pretty incredible Italian Parmesan meatball recipe right here.

Add the parsley, egg and seasonings. For this recipe, chili powder is the star, but you can also make your own substitutions. Garlic powder, basil or even a little red pepper if you want it spicy. You can also add in some milk if you think the mixture is too dry and crumbly.

And if you don’t already own one, you’re going to want to get a cast-iron skillet for this job. It’s really the way to go — with meatballs and so many other recipes!

Get The Ingredients And Recipe

Once you have your meatball mixture set, the rest is fairly simple. Get the full list of ingredients and complete recipe from House of Yumm.

If you’d like something a bit sweeter, you might try this Bacon Honey Bourbon Chicken Meatball recipe from Gal on a Mission—same concept, but a little added sweetness.

These meatballs are made with chicken, mushrooms and Italian sausage and a Carolina barbecue sauce.

Once you’ve finished your meatballs, serve them with a green salad and some crusty bread to soak up all that decadent sauce. Something tells us that no one is going to be sharing the last one of these babies!

Speaking of bacon, for anyone who likes to eat it, you know what a hassle it is to cook it. Oil splatters everywhere, some pieces get burnt while others come out underdone, and it’s an overall mess.

Fortunately, there is one trick that is said to not only make bacon easier to cook, but will leave the strips both crisp and tender, rather than dry and crumbly.

And that trick is to simply cook it in water.

According to America’s Test Kitchen, place the bacon in just enough water to cover it in a skillet over high heat. At first it might seem like there’s too much water in your skillet, but that additional water will help keep the cooking temperature low so the meat will retain its moisture, which ultimately leaves your bacon tender.

Once the water reaches a boil, you’ll want to reduce the heat to medium. When the bacon starts to turn crispy and appears to be well-browned, then it’s likely done cooking and ready to go.

Food is certainly one of the most important parts of a Super Bowl party, but you’ll also need a way to tune into the big game. If you don’t have cable, you might be wondering how to do that. Super Bowl LVI will air on NBC on Feb. 13. You can stream it on Peacock or the NBC Sports app, for example. But if you want to avoid subscription fees, the original way to watch the Super Bowl remains the most cost-effective and reliable: install an over-the-air digital antenna. Since the game always airs on either CBS, Fox or NBC — three of the major over-the-air broadcast networks — it’s totally free for anyone with a TV and antenna to watch on their local affiliate.