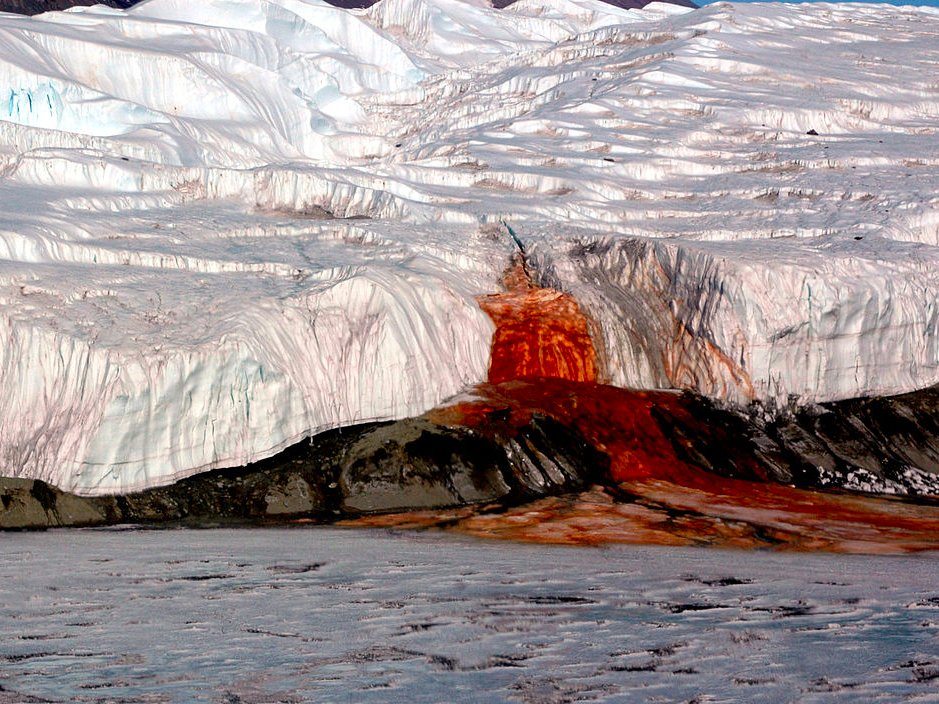 Near the bottom of the world sits a gruesome sight. The Blood Falls of Antarctica look more like a horror movie set than a natural wonder. Red liquid pours out of a crack in a massive glacier on the continent. One look at the image and you’d swear the world bleeds.

Back in 1911, geologist Griffith Taylor discovered Blood Falls spilling into Lake Bonney in Antarctica. The glacier where the falls flow from were named after Taylor after his discovery.

However, it would take more than 100 years to get a clear answer on the glacier’s waterfall.

Scientist Jill Mikucki brought a team down to Antarctic to study Blood Falls in 2004. The team analyzed liquid from the falls and found something incredible.

The water held a “community of microorganisms” from a reservoir several times saltier than the seawater. These microorganisms use sulfate for their respiration.

Once the super-salty water hits the surface, its chemistry changes in the sulfate and changes its color. As a result, the liquid gets its notorious red color. The journal “Science” published Mikucki’s findings in 2009.

From 2014-2015, Mikucki returned to the frozen continent with another team for further exploration. This time, the team sent a probe deep into the Taylor Glacier to study samples from below. The team pulled up a sample of water directly from the main vein that feeds Blood Falls.

“It was one of those exciting moments in research,” Jill Mikucki told the Antarctic Sun. “The thing that I love about Antarctic work is that it is both physically and mentally challenging. You have to pull all of your energy together to achieve these successful moments together as a team.”

RELATED: This Montana Lake Filled With Colorful Pebbles Is One For Your Bucket List

Click the video below to see Mikucki explain her work down in Antarctica.