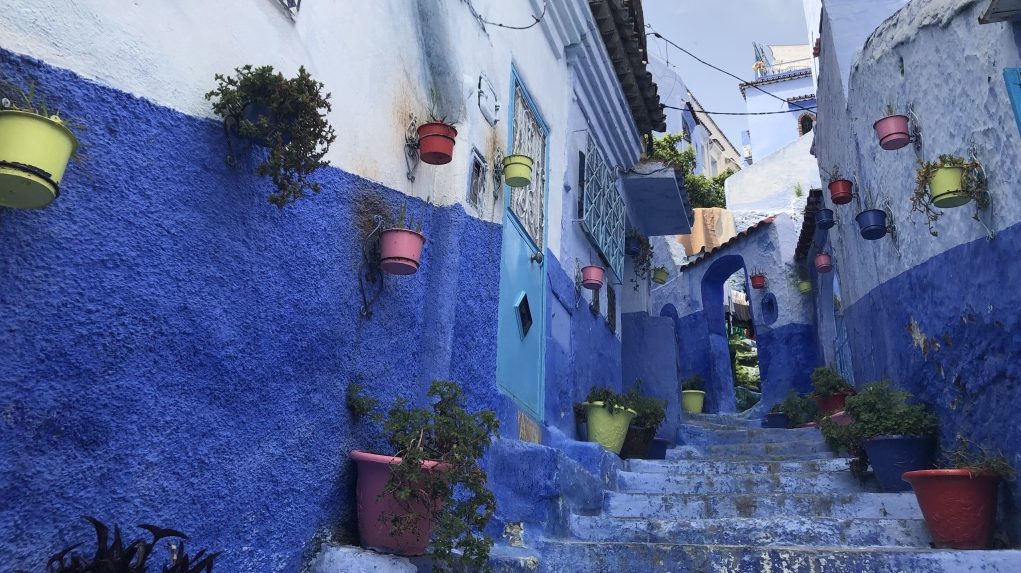 There’s a colorful mystery in this city in the hills. Tucked up against a mountainside in northern Morocco’s Rif Mountains, Chefchaouen seems unassuming enough as you approach, except for one distinguishing characteristic — at the center of the city, many of the walls, doors and even some stairways are painted in every imaginable shade of blue.

Stay in the heart of Chefchaouen’s medina and you’ll wake every morning to a maze of whitewashed walls covered in turquoise and cerulean to explore. But the medieval town’s blue origins are hazy. There are several theories about why the walls are painted this way in the Blue Pearl shade, as it’s known.

One of the prominent explanations goes like this: The city’s tradition of painting the walls blue dates back to the 15th century, when the Spanish Inquisition caused a forced migration. Muslims and Jews fled Europe, and Chefchaouen, founded in 1471, became a home for some of these refugees. The city’s Jewish residents followed a tradition of painting their buildings blue as a reminder of the power of God. Even as the city’s population shifted, the Muslim residents continued to paint the town in blue.

Another theory is that Chefchaouen has only been blue since the 1930s, when a new group of Jewish refugees came to the city. At first, only the Jewish quarter was blue, but the color spread to the rest of the medina.

Other explanations range from mosquito prevention to honoring the spring that feeds the town’s water supply.

Whatever the reason, the result is a little surreal.

Today, Chefchaouen’s residents have drawn from every shade of blue in the crayon box, and it has become a draw for Instagram-happy tourists from all over the world.

When I visited, I was always trying to snag some people-free shots of the medina’s pathways, and since I’m somewhat of an early riser, I pulled off a few. (Also, I suspect the town’s residents grow tired of being photographed when they’re going about their daily lives.)

Chefchaouen’s many cats were always welcome additions to my photos, though.

In keeping with the tradition of painting the walls, many residents have also added other blue accents, painting their doors and flower pots blue as well.

The riad we stayed in had a lovely blue door. (Hi Mom!)

Chefchaouen isn’t the only place known for its shades of blue. Greece’s Santorini is so well known for its blue-hued roofs that it inspired a Benjamin Moore paint color.

There’s also a blue city in India called Jodhpur, located in the state of Rajasthan. More than 6 miles of the old walled city is painted blue. Supposedly, blue colors on the houses indicated that a Brahmin, or priest of the Indian caste system, lived there. Over time, though, the color became identified with the city at large.

Here’s an image from @uncommon_destinations on Instagram showing a view of Jodhpur:

It’s a beautiful blue world out there!