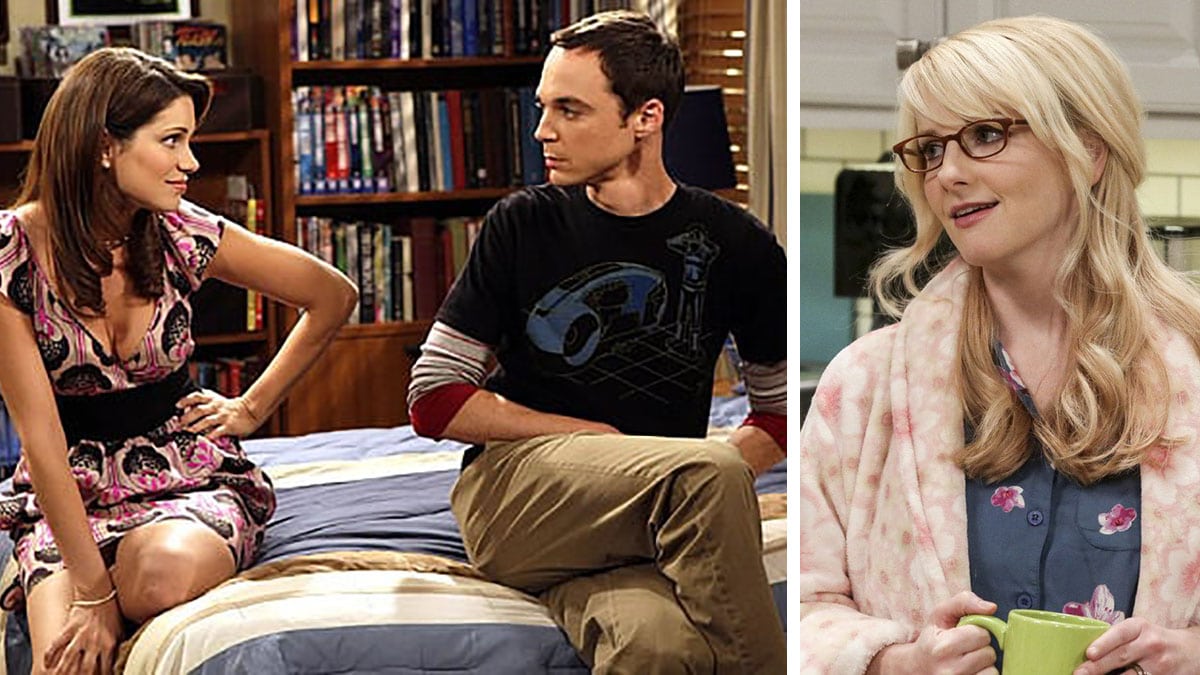 After 11 seasons, “The Big Bang Theory” is still making audiences laugh with its story of a lovable bunch of nerds, their friends, families and romantic interests.

But have you ever wondered about the cast and what they’re like beyond the show? Here’s a look at the mega-popular CBS show’s characters and the real-life actors who play them.

A genius with a high IQ and low social skills, theoretical physicist Sheldon Cooper has become less robotic — though not much less neurotic — over the course of the series. We still love him, anyway! (By the way, the best Sheldon moment still remains the Leonard Nimoy napkin/gift basket exchange with Penny.)

After many years of working in TV, “The Big Bang Theory” made Jim Parsons a star. He is originally from Houston and has appeared in films like “Hidden Figures” and “The Muppets.” He married his long-time partner Todd Spiewak in May 2017.

Experimental physicist Leonard Hofstadter withstood living with Sheldon and his iron-clad “roommate agreement” for much of “The Big Bang Theory” before Sheldon moved in with his girlfriend, Amy. Leonard finally managed to put a ring on on-again/off-again love interest Penny’s finger in the show’s seventh season.

First known for his role as David on “Roseanne,” Johnny Galecki now plays the conventional scientist to Jim Parson’s Sheldon and his array of quirks. Galecki also performs in a duet band when he’s not filming “The Big Bang Theory.”

Aspiring actress, former Cheesecake Factory waitress and current pharmaceuticals sales rep, Penny started off the series as a stereotypical “dumb blonde” across the hall from the nerdy quartet of scientists. But she’s often the voice of reason and stand-in for the TV audience when it comes to comprehending the show’s scientific world. (We also have never found out Penny’s last name.)

Kaley Cuoco is now one of TV’s top-paid actresses, earning $1 million per episode like her co-stars Parsons and Galecki. She’s an avid equestrian and used to be an accomplished tennis player. She and husband Karl Cook share a love of horses, as he’s a professional equestrian and the pair met at a horse show.

Constantly teased by Sheldon for being “only an engineer,” Howard Wolowitz also managed to become an astronaut more than halfway into the series. He’s now married to Bernadette, who has always been a bit out of his league. They have two little kids together.

Simon Helberg, who has a decidedly less dorky haircut in real life, is married to actress Jocelyn Towne. Along with Galecki and Parsons, Helberg has gone behind the TV camera to launch other shows.

Amy Farrah Fowler came on “The Big Bang Theory” as an online date for Sheldon Cooper and became a series regular. She and Sheldon tied the knot in the 11th season finale. Her neurobiologist character wears dowdy jumpers but has a “wild” streak — or so she thinks.

Best known for her starring role in “Blossom” during the ’90s, Mayim Bialik is a brain in real life — she earned her Ph.D. in neuroscience at UCLA!

She has been outspoken on a number of issues including parenting, depression, modesty in Hollywood and her Jewish faith. She has also published several books, including one about attachment parenting and a vegan cookbook.

Comic book shop owner Stuart Bloom is a lovable loser who strikes out with women but has done well in business thanks to a recent Twitter bump from Neil Gaiman. He was living with Howard’s mother as her caregiver for a period of time and is also a regular babysitter for Howard and Bernadette’s kids.

Also known for his role on “Ugly Betty,” Kevin Sussman’s role on “The Big Bang Theory” grew from a recurring character to a series regular.

Ultra-religious Bible Belt mom Mary Cooper can keep her “Shelly” in line with lectures and home remedies — but she still comes off as a lovable mom.

Academy Award-nominee Laurie Metcalf did the award show circuit this year for her role in Greta Gerwig’s coming-of-age film “Lady Bird.” Also known for playing Aunt Jackie on “Roseanne,” Metcalf has been a fun addition to “The Big Bang Theory” when she makes an appearance.

Leonard’s mother Dr. Beverly Hofstadter is a neuroscientist and psychiatrist who was never the warm-and-fuzzy type.

Christine Baranski is a veteran stage and screen actress who also stars on “The Good Fight,” a spinoff of “The Good Wife.”

Raj’s sister Priya came to the U.S. and stayed with Raj for a period of time. She is an accomplished lawyer and also dated Leonard when he and Penny were on a break.

Like the actors that play her parents, Aarti Mann’s role on “The Big Bang Theory” was expanded after originally being planned for a smaller part. After studying theater at NYU, Mann appeared in a film directed by her sister, Kruti Majmudar, called “The Memsahib,” and she has also appeared on “Heroes.”

Dr. V. M. Koothrappali mostly appears on “The Big Bang Theory” via Skype sessions with his son, Raj. He and Raj’s mother are constantly nagging Raj to grow up, get married and make something of himself.

Israeli-Indian actor Brian George is a veteran of Hollywood who became famous for his role on “Seinfeld” as Babu Bhatt, a chef who loathes Jerry.

Raj’s mother hasn’t appeared on the show except on a computer screen when video chatting with Raj and his sister.

British actress Alice Amter has been living in the U.S. for over 20 years. She and Brian George were only supposed to have a one-time role on the show as Raj’s parents, but their characters were popular enough to make return appearances.

Lisping Barry Kripke works with “The Big Bang Theory” team at Caltech as a string theorist. He’s constantly putting down Sheldon and trying to pull a fast one on him.

John Ross Bowie has found success on the TV show “Speechless” with Minnie Driver and has also appeared on the comedies “Episodes” and “Children’s Hospital.” He and Kevin Sussman (who plays Stuart) have a sitcom in development.

Real-life “Star Trek: The Next Generation” actor Wil Wheaton plays a version of himself on the show. The sarcastic former child actor is another nemesis of Sheldon’s, although he has softened up in recent seasons.

Wil Wheaton grew up on TV as Wesley Crusher on “Star Trek: The Next Generation” and had a memorable role in the iconic 1986 film “Stand By Me.” He’s a big gaming fan and is married to author Anne Wheaton.

Caltech geologist Bert Kibbler is pure good guy. He had a crush on Amy and has also won a prestigious MacArthur Fellowship.

Brian Posehn is an actor known for his appearances on “New Girl” and “The Sarah Silverman Program,” along with his stand-up comedy.

We haven’t seen her much in recent seasons of “The Big Bang Theory,” but Caltech experimental physicist Leslie Winkle used to date Leonard. She also had a running gag calling Sheldon a “dummy” and “dumb a**.”

Known for her role on “Roseanne,” Sara Gilbert reunited with her “Roseanne” co-star Johnny Galecki in her role as his girlfriend early in “The Big Bang Theory”‘s run. (The two dated in real life once upon a time.) She has also been a daytime host on “The Talk” since 2010.

We never saw Debbie Wolowitz, Howard’s mom, fully on screen. She was usually only heard, screaming at Howard from another room or on the phone. Debbie passed away in a recent season, and Howard and Bernadette moved into her house.

Actress Carol Ann Susi passed away of cancer in 2014 at the age of 62. “The Big Bang Theory” writers also wrote her character off the show after Susi’s death.

Despite his good looks, Rajesh “Raj” Koothrappali has not been lucky in love on “The Big Bang Theory.” In fact, the astrophysicist used to need a drink in order to talk to women, but he’s at least moved past that phase.

London-born, New Delhi-raised Kunal Nayyar came to the U.S. to study business at the University of Portland. However, his passion for acting won out and “The Big Bang Theory” was one of his first big roles. He’s married to fashion designer Neha Kapur Nayyar and is an experienced golfer.

Bernadette Rostenkowski-Wolowitz may be short and speak with a high-pitched squeak, but she’s also one tough cookie who can bully people into doing her bidding. She just had two children back-to-back, is a successful microbiologist and hasn’t divorced the often-annoying Howard yet — so you know she can handle herself.

Melissa Rauch’s real-life pregnancy was written into “The Big Bang Theory” when her character got unexpectedly pregnant with her second child. She’s been open about her own struggles to have a baby and her miscarriage. Rauch also recently wrote and starred in “The Bronze,” a comedy about an ex-Olympic gymnast.

Zack Johnson often appears clueless on the show and is Penny’s former love interest. The two were accidentally married in Las Vegas and didn’t realize it until several years after the fact.

Actor Brian Thomas Smith has been a contestant on “The Amazing Race”  and appeared in a slew of commercials, including for brands like Taco Bell, Carl’s Jr, Bud Light, Pop Chips, Honda, Burger King, Buick and many others.

It turns out that these beloved characters look a lot less dorky in real life. Here are some fun facts about the main cast members – wait until you see what they look like when they’re walking the red carpet and dressed to impress!

Sheldon’s fraternal twin sister, Missy is charming, sociable and not at all interested in scholarly pursuits — in other words, almost the exact opposite of Sheldon.

This actress, model and singer says her first Hollywood job was in a McDonald’s commercial. In addition to “The Big Bang Theory,” she’s appeared on “House” and is now mom to a 1-year-old son.