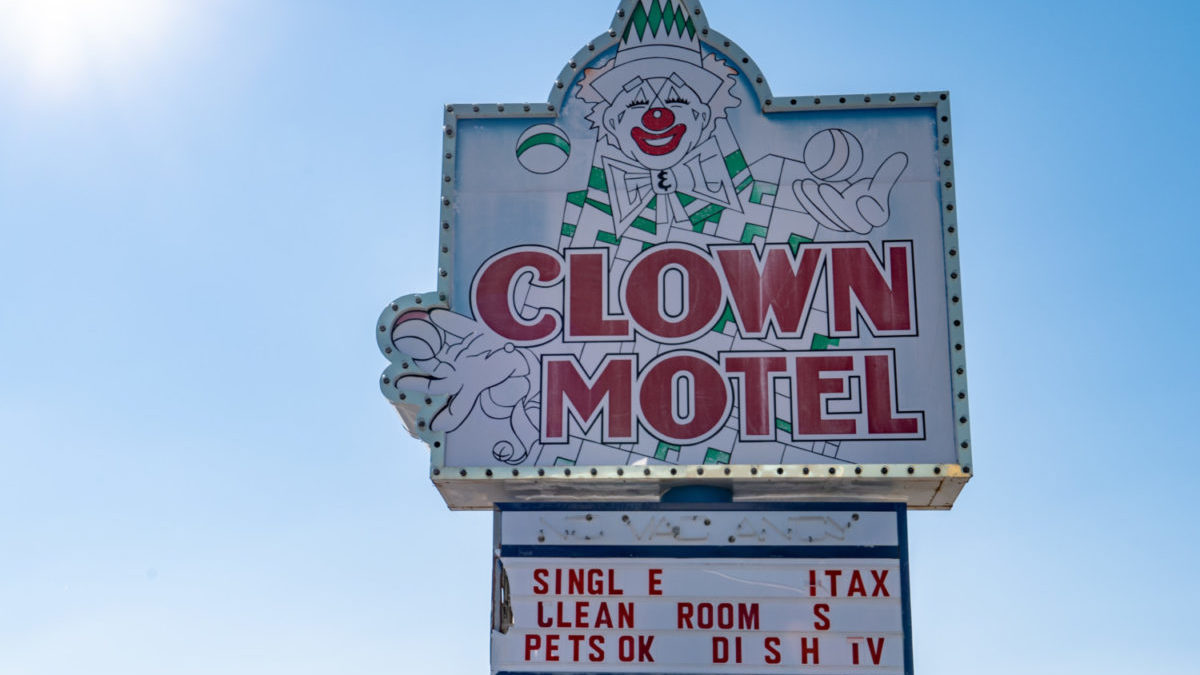 If you’ve ever wanted to never sleep again, have we got the place for you! A motel that’s entirely themed around clowns in Tonopah, Nevada, is open for visitors looking for a thrill — or for people who just really like clowns. (Do they exist?)

If the sight of an illuminated, juggling clown welcoming you to the motel promising “clean rooms” (not much of an endorsement for the amenities) and “singles for $39.50” fills you with cheer, then come on down to the Clown Motel.

The lobby is littered with clowns, including a life-sized clown sitting in a chair, cradling a number of smaller clown dolls in its lap.

Oh, and every room is clown-themed: There are clowns on the doors and portraits of famous clowns (hi, Bozo!) hang on the walls.

Want more? OK, have some of this creepiness: Tonopah is widely considered to be a ghost town.

RELATED: This Creepy Clown Motel Is Now For Sale

The current population is around 2,000 people, but as a former mining town, it used to be a thriving metropolis of over 50,000. It was where the second-largest discovery of silver in the history of the state of Nevada was made. Today, it’s got that desolate openness that you likely equate with many desert towns of the west.

Its status as a mineral mecca meant a lot of people — miners, frontier explorers and more — once lived and died in Tonopah. Some of them are buried in the town’s old cemetery, dating back to 1901. So if the clowns weren’t enough for you, toss in some ghosts of miners and prospectors, too.

As luck would have it, the Clown Motel is located literally right next to the old cemetery, so you’ll have a nice view of one of the many wood-and-tin headstones marking the dusty graves.

That being said, the motel and the cemetery both seem to be devoid of otherworldly happenings. There are few strange stories here and there, but most of the reviews of the motel just note the free Wi-Fi and “mini breakfast.”

Still, the Clown Motel has been dubbed “America’s scariest motel,” and it’s certain to continue to do a brisk business as long as the trend continues.

In 2017, the Clown Motel went on the market and eventually found a new owner, who has apparently not tried to tone down its creepiest aspects. The property was listed at $900,000 and sold for an undisclosed price in 2019 to a person who also owns a hotel in Las Vegas — which is about a three-hour drive to the southeast.

The new owner reportedly wanted to add themes to the rooms and add in a coffee shop. Clown cappuccinos, anyone?

If you can’t make it to the Clown Motel but are dying to bask in its creepiness, the 2019 slasher movie, “Clown Motel: Spirits Arise” was actually filmed on location there! Among its cast is Ari Lehman, who played the young Jason Voorhees in 1980’s “Friday the 13th.” Yes, that was him popping out of the lake in the chilling final shot.

So what do you think: Are you brave enough to spend the night? Sweet dreams …