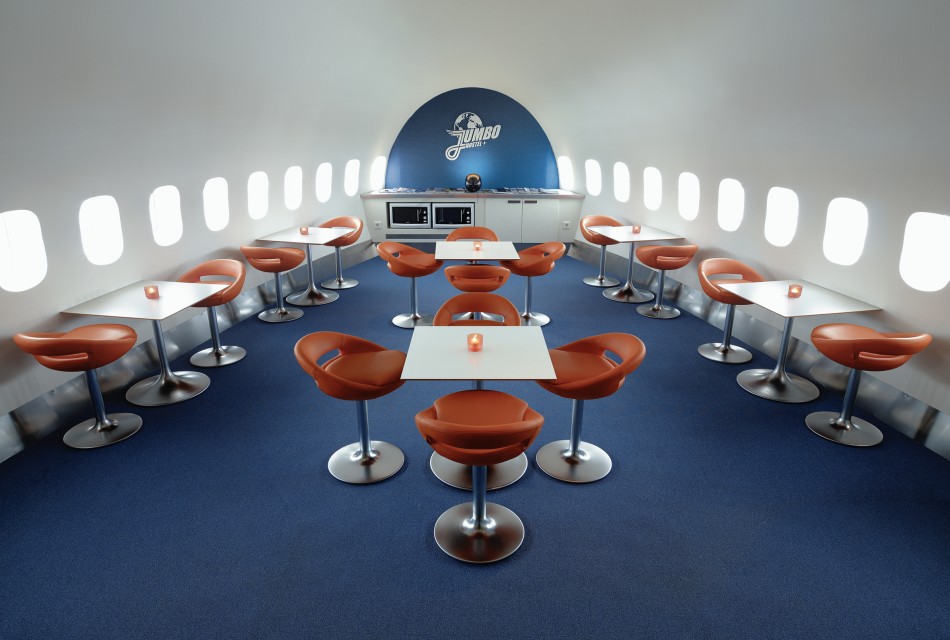 We’ve spotted lots of re-tired train cabooses that have been madeover into cute Airbnb rentals. But for another travel-themed stay option, did you know there’s a commercial airplane that’s been converted into a Swedish hotel, with room rates starting at just $45 a night?

Jumbo Stay is a hotel situated inside a decommissioned Boeing 747-200 jetliner that’s parked near the Stockholm Arlanda Airport. Now an obsolete model, the aircraft was originally constructed in 1976 for Singapore Airlines. The wide-body airliner was retired in 2002 after flying for several different airlines including Pan Am and Swedish Transjet.

In 2007, the municipality of Sigtuna granted a building permit to turn the airplane into a hotel at the entrance of the Arlanda Airport. The remodel included removing 450 flight seats, repairing the interior, and converting the airplane into a 33-room hotel.

Rooms in this airplane hotel come with runway views and overlook the plane’s hulking engines. Before it made its debut as a place to stay in 2009, the airplane was placed on a concrete foundation and secured with steel cradles.

In all, Jumbo Stay can sleep up to 76 people with rooms outfitted with one to four beds. One of the most interesting stays is the Cockpit Suite, which has two beds, a bathroom and a TV in the plane’s former cockpit.

While Jumbo Stay is unique because it’s located in a former aircraft, you can find some aviation-themed stays elsewhere.

One stellar example is in Fredericksburg, Texas, at the Hangar Hotel, which is a 1940s-themed hotel that’s designed to look like a WWII hangar. The hotel, which is outside of San Antonio, is set on a runway and features airline memorabilia and USO history. The Hangar Hotel has an events center and diner, too.

Do you think the airplane hotel trend is ready for takeoff?