Most of us know that Apple collects data on our locations via the slightly creepy GPS that’s built into the phone. You can turn off location services for most of your apps, like Facebook.

But, a tech-y genius at Thrillist found that there’s one map hidden in your iPhone that tracks everywhere you go and saves this information over time. The featured is concealed inside Settings and Privacy, and it’s tricky to find from there. It’s called “Frequent Locations” and you should probably shut it off ASAP.

Not only does Frequent Locations track and save where you’ve been, it can pinpoint your exact location on a street and will save it for months. For example, when I checked Frequent Locations, it showed me the address of a hotel I stayed at in Denver last weekend, the shopping mall that I shouldn’t have visited when I went to North Carolina last month, and it had even saved my ex-boyfriend’s address from when I used to visit him in Madison, Wisconsin. Just in case that isn’t creepy enough for you, my Frequent Locations also saved the exact times that I was at these locations. It provided time stamps if I visited an area more than once, and the stamps were down to the minute. Like, how?! And, why?! 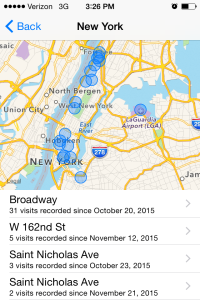 Apple apparently says that the feature is less creepy and more practical. According to Thrillist, Apple says the data is “kept solely on your device and won’t be sent to Apple without your consent.” But, then, you’ve gotta think about all those terms and conditions that you sign without reading. Maybe you already accidentally gave Apple your consent without knowing it. Apple is going to rule the world!

OK, I’m going a bit far, but it is really weird. Apple says that Location Services helps your phone provide personalized services, like giving you routes with less traffic if you’re using the Maps feature to get somewhere.

That’s all really nice sounding, but my question is why is the phone programed to save all of these locations? And what the heck is with the specific time stamps?

Thrillist seemed to think the creepiest aspect of the feature is that your mother or a snooping significant other could see where you’ve been recently. But, because I’m an honest person, I’m more worried about what could happen if I lost my phone. It’s not hard to hack someone’s iPhone password, so if someone were to steal my phone, they would have my exact address and all of the addresses that I’ve visited recently. Now that is terrifying. 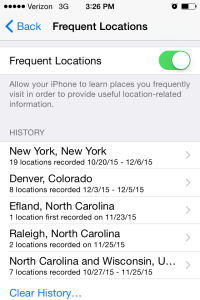 So, here six quick steps to shut off Location Services: