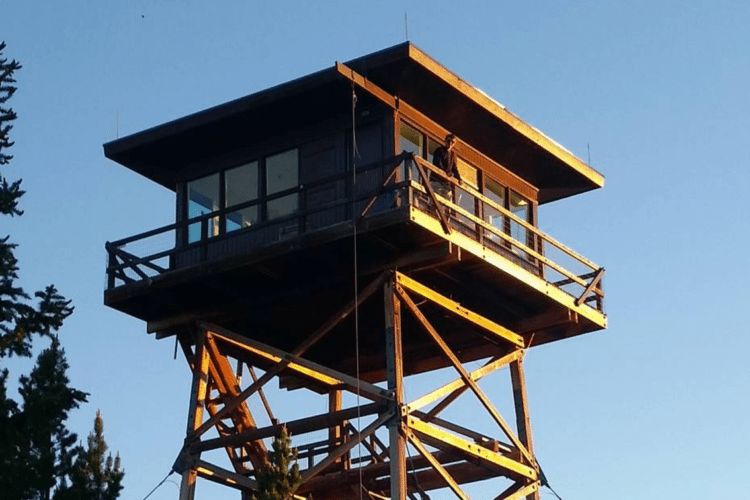 The U.S. Forest Service has an inventory of more than 60 fire towers scattered throughout the United States, mostly in the West, that are available to rent.

In their past lives, these towers played a critical role in wildfire detection. They were built on mountain tops above the tree line, allowing people to be on the lookout for smoke, and alerting firefighters on the ground.

Now, these fire towers are enjoying retirement, hosting guests who are seeking a pastoral retreat. (Fun fact: Beatnik Jack Kerouac spent more than two months as a fire lookout at Desolation Peak, which is in the North Cascade Mountains in Washington state).

A word of caution, though: Getting to these backcountry towers requires a little work, including hiking in and packing everything from toilet paper to a sleep set-up. Each set up is a little different.

Without further ado, though, here are eight stunning places where you can stage a sleepover in a fire tower.

If you’re looking for an alternative to a swanky ski resort in Colorado’s Rocky Mountains, you can book a night in the Squaw Mountain fire tower. The tower can serve as your basecamp for cross-country skiing or snowshoeing in the winter, or hiking amid the wildflowers in the summer months. Built in the 1940s by the Civilian Conservation Corps, this fire tower was constructed with granite sourced from the area.

The view: From one side, you’ll get a cityscape view looking out over Denver. You’ll also spot the Great Plains, and some of Colorado’s famous peaks including Mt. Evans, Pikes Peak and Long’s Peak, as well as other mountain peaks that are snow-capped year-round.

Here’s a photo of this fire-tower-turned ski lodge, shared on Instagram by Colorado Made:

This little spot was home for the weekend. Up top you'll get 360 degree views of wildlife, far off 14ers, and even Denver on a clear day. Learn more about the Squaw Mtn Fire Lookout and staying there at fs.usda.gov. #comade #coloradomade #squawmountainfirelookout #squawpassrd

Here are even more amazing fire towers to spend the night in:

Bald Mountain is the ultimate tree house, surrounded by red cedar, hemlocks (the non-poisonous tree variety not the poisonous plant), western white pine, Douglas fir and spruce trees. It was a fire lookout between 1956 and 1984.

The view: Bald Mountain is one of the highest peaks in the Hoodoo Mountain Range. Guests at this rustic retreat also spot eagles soaring through the sky, as well as bear, moose, elk and deer in the area. To the south are the rolling hills of the Palouse.

Instagrammer Abel Galvan shared this photo of the scenic spot:

In its past life, Evergreen Mountain Lookout was used as an Aircraft Warning Station during World War II. Then, it was an active fire tower up until the early 1980s.

Now, with the help of volunteer restoration projects, it’s one of the best places to catch a sunset (as seen in the photo below, shared on Instagram by @jboggs32). It does require a steep hike to access it.

The view: It’s a multi-sensory experience here. You might spot elk, bobcats and bald eagles as well as hear wolves howling. You’ll also be treated to views of the Mt. Rainier and Glacier Peak.

Way back Wednesday- Front porch views in the PNW 🌄

The Hornet Lookout is two stories and an ideal base camp for any Glacier National Park activities you have planned. The upstairs loft offers an ideal viewing point. It was built in 1922 and was a watchpoint for fires in the North Fork area.

The view: You can spot Glacier National Park and Kintla Lake on clear days. But the real treat is the ability to spot the Northern Lights from the lookout on some nights. Just look at the sunset view in the photo below, shared on Instagram by @bookmans_adventures.

This former lookout tower is now a prime place to catch a fireworks show. If the opportunity presents itself, book the Yaak Mountain fire tower over the Fourth of July. You’ll catch the nearby town of Troy’s firework display.

The view: Nestled in the Rocky Mountains, the Yaak Mountain Lookout also offers up stellar views of the Kootenai National Forest.

RELATED: 6 Overwater Bungalows That Are Closer—And Cheaper To Get To—Than You May Think

Sleep nearby a volcano? You bet! Little Mt. Hoffman sits on the flanks of Medicine Lake Highland, which is the largest identified volcano in California.

The fire tower was built in the 1920s and used by the U.S. Forest Service regularly until 1978. In fact, the forest service still uses the lookout when there is an extreme fire danger.

The view: You’ll be atop the rim of a caldera and able to check out the diverse volcanic landscape that surrounds the area. You can also see Mt. Shasta, Mt. Lassen and Mt. McLoughlin, which is in southern Oregon. Bonus: Medicine Lake is open for swimming, something that @terlayton’s pooch (featured in her photo below) might love.

7. Lake Of The Woods Lookout Near McCloud, California

Originally this cabin was a “ground house” situated on Barklow Mountain. But in 1974, the Lake of the Woods Lookout was flown in by helicopter and delivered to its present location. The 12-foot tower and catwalk was used to spot fires until 1996.

The view: From here, you’ll get sweeping views of the Pacific Ocean’s rugged vistas as well as the Kalmiopsis and Wild Rogue wilderness areas. Like @truenpence noted on Instagram (see photo below): “Soaked in some serious sky on this trip.”

Soaked in some serious sky on this trip #lakeofthewoodslookout #nofilter

If you want to experience a fire tower with your children, Thompson Peak might be a good bet because of its enclosed stairway. This is also perhaps one of the most modernized towers, though it’s still remote.

The view: Splayed out before you is the 2 million-acre Lolo National Forest, home to mountain goats, bighorn sheep, elk, moose and bear. And as @zrakke captured in their photo below, you’ll also spot some serious views.

RELATED: If being up in the air isn’t your thing, check out this hotel that’s floating in the middle of the ocean!

How to clean a burnt pan

Being strict with my kids is hard, but here's why I keep at it