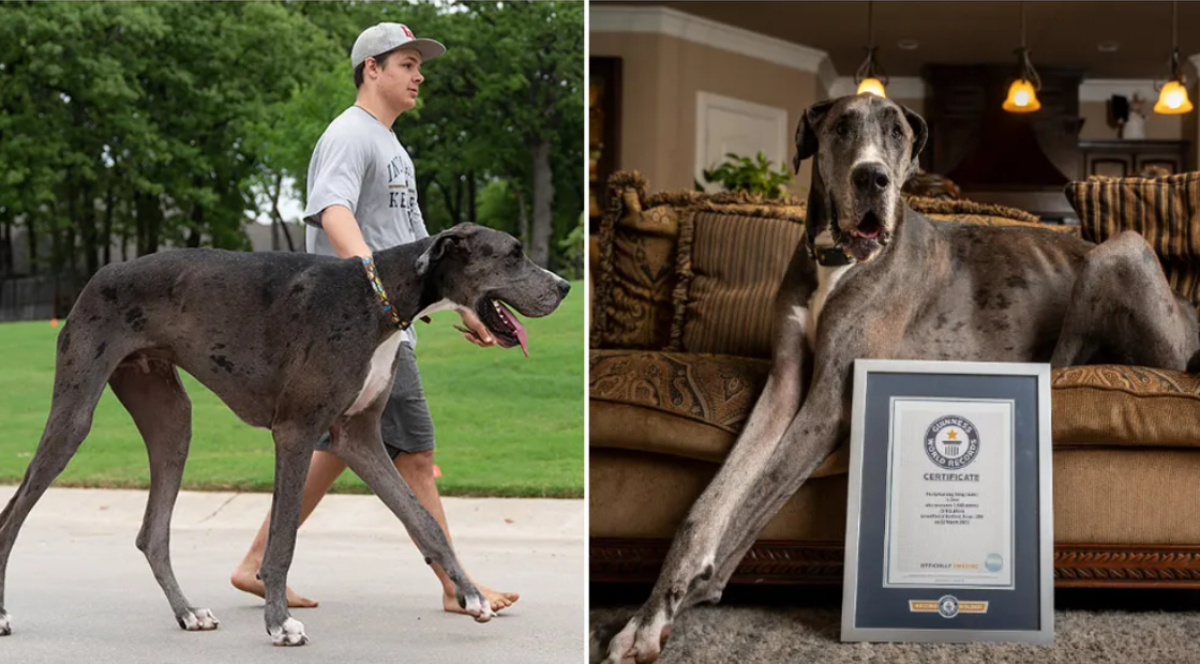 A 2-year-old Great Dane from Texas just set the Guinness World Record for being the tallest living dog (male) in the world! Standing at over 3 feet, Zeus is officially taller than most human 2-year-olds, making him an impressive presence when he walks down the street.

Zeus belongs to Brittany Davis, a lifelong dog-lover who has always particularly adored Great Danes. She always knew she wanted to own a Great Dane someday, so imagine her joy when her brother’s work colleague had Great Dane puppies available for adoption. She promptly took the gray-and-brown Great Dane pup home, and it wasn’t long before Zeus grew to the impressive stature of 3 feet and 5.18 inches (on all fours).

“The comment that we hear most often is ‘Wow, that’s a horse!,’ ‘Can I ride him?’ or ‘Does he have a saddle?'” Davis said told Guinness. “The answer to all those questions is ‘no.’”

Davis also owns three other dogs — all miniature Australian Shepherds — and a cat. How does the feline take to her enormous brother?

“He and the cat have a mutual agreement to stay away from each other,” says Davis.

You can watch Zeus in action in this video posted by Guinness World Records below:

Ironically, the last dog who held the world’s tallest title was also named Zeus. The massive Dane from Michigan was also over 7 feet tall on his hind legs. Sadly, that Zeus passed away at the age of just 5 years old. Great Danes have one of the shortest lifespans of all dogs, living 8-10 years on average, with many Great Danes only making it to 6 years old. Their large size can lead to many health issues, such as bloat and joint diseases.

But, luckily, the new Guinness world record holder for the tallest living dog is still in great health.

“When we take Zeus to the vet, they’re always in amazement,” Davis told Guinness. “They’re very impressed with how healthy he is. He loves going to the vet; he gets lots of attention.”

Here’s to Zeus’s continued health … but for his family’s sake, let’s hope he doesn’t get any bigger!