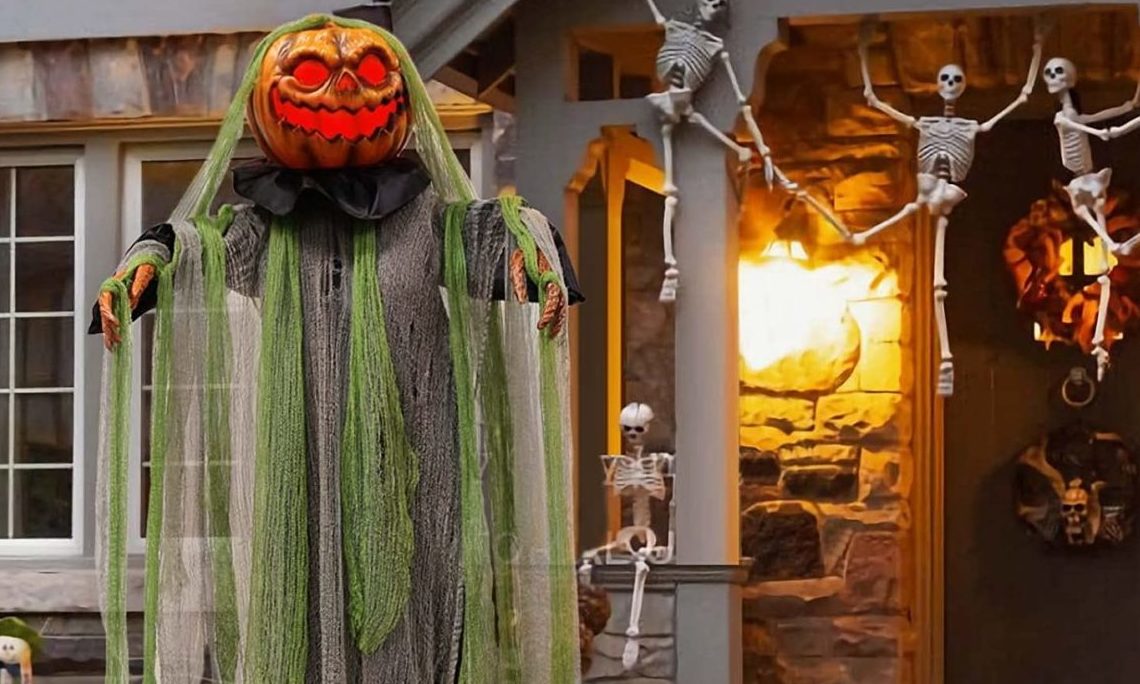 There’s absolutely nothing wrong with keeping your holiday decorations simple, but if you think bigger is better, you’ll want to make sure you have some Halloween animatronics to decorate with this spooky season.

While you may think you have to go to a big-box store or specialty retailer to find the best larger-than-life decorations to scare your neighbors, Amazon has quite a few Halloween animatronics online right now that range from heights of a couple feet to taller than your average adult.

Many of Amazon’s Halloween animatronics are also priced lower than some you’d find at other stores, with most under $100 and some even less than $50, so it’s worth checking them out compare before buying at least. Take a look at some of the best-reviewed Amazon Halloween animatronics to get your house in shape for chills.

Regularly priced at $70, this animatronic killer clown is currently marked down to $55. Standing at 5 feet, 3 inches, the clown reacts to motion and sound and is attached to a set of motors that move its head and arms back and forth in time with pre-recorded phrases. “Hey! You look familiar … maybe that’s because I’ve been hiding under your bed!” is just one of the creepy things this thing says.

The clown’s arms are also posable and it has glowing red eyes that light up with motion or sound. Wrapped in a simple beige and red polyester, the clown’s collapsible plastic base connects to a pair of metal rods and it’s operated by batteries, so you don’t need to find a place to plug it in.

With nearly 2,000 reviews at Amazon, this Halloween animatronic has 4.4 stars out of 5, with customers saying it’s easy to assemble, worth the money and great for a haunted house. There are a few negative reviews that say it arrived not working, but they sent it back and received a replacement, so make sure yours runs right when it arrives.

One customer who gave the clown a 5-star rating and shared a video of it in action called it “absolutely amazing”.

“The sound is extremely loud, movement is great and the price can’t be beat,” Amazon customer T. David wrote. “This clown was the best decision to add to my Halloween collection. Way better than spending hundreds of dollars on a “name brand” clown that does less. This was a fraction of the price and had kids literally crying and screaming when it jumped to life.”

If you want something … furrier, this 5-foot-tall animatronic werewolf stands on his own and has adjustable arms and a motorized head to give trick-or-treaters or Halloween party guests a scare.

The werewolf responds to sound and touch with howling sounds, glowing green LED eyes and creepy movements. It also has posable arms, fur and clothing that’s tattered to give the impression that it recently transformed. Customers say the base is easy to put together and simply connects to metal poles, which attach to the body. Then you insert batteries and it’s ready to go.

This cocoon corpse decoration measures 5.4 feet long and hangs upside down. Easy to set up, the decoration has a string at its foot area, so you can hang it indoors or outdoors with just a hook or nail. It is not waterproof, so you’ll want to either hang it on a covered porch or only put it outside if it’s not raining.

While already pretty scary, the cocoon body also has built-in yellow lights, machinery to make it tremble and it makes spooky sounds. You do not need to place this one near an outlet, either, as it’s battery operated.

The decoration has a rating of 4.2 stars out of 5, with most customers saying it’s a great prop, the motion is scary and storage is easy. There are a handful of customers, however, who’ve said it stopped working for them before the Halloween season ended, while others say you may just think it’s not working, but it’s because you actually have to touch it to activate it, as simply walking by does not make it move.

If jack-o’-lanterns have always seemed more creepy than cute to you, this 6-foot Halloween animatronic with a pumpkin head would be a great addition to your decor. This life-sized prop works indoors or outdoors. The pumpkin head has a scary face that lights up and it’s dressed in a black rooting fabric costume with gauze accents. The Root of Evil, as it’s been dubbed, also makes spooky sounds and moves around with touch or is activated by sound. It can stand or hang and it runs on batteries.

With around 100 reviews so far, the prop has a total grade of 4.2 stars out of 5, with customers saying it’s easy to assemble, imposing and a great decoration. One customer who gave it a 5-star rating says it’s affordable, well-made and entertaining.

The only thing scarier than one clown is two clowns! These Animated See-Saw Clowns cost a bit more than some of the items on the list, normally priced at $237, but are marked down as of this writing.

The prop measures 4-feet wide by 3-feet tall and plugs in for power, so you’ll need to either keep it inside or on a porch with an outlet. The prop can be activated by an infrared motion sensor, step pad or power switch. When activated, the seesaw moves up and down and eerie music plays.

While it only has 99 reviews right now, it has a total rating of 4.4 stars out of 5, with 70% of customers giving it a full 5 stars. Many customers say it’s creepy, works well and the music it plays is spooky.

This 6-foot hanging witch is definitely a showstopper! Priced at less than $50, the prop is motion- and sound-activated, so anyone walking by or any kids talking while trick-or-treating will activate it. Once that happens, the witch lights up and emits scary sounds like screaming, laughing and some fun sayings. The witch can hang from a tree or sit in a rocking chair on a porch. It uses batteries, so you can put it anywhere regardless of if you have a power source nearby.

The witch has nearly 800 reviews so far and 4.3 stars out of 5 from Amazon users. Customers say she comes as described, is fun and scary. Some customers, however, said some portions (like her hat) come unglued, while others say the motion-activation isn’t sensitive enough and you have to get very close or touch her to make it work.

One customer who gave it a 5-star rating says they love the witch and said she is “much better than expected”.

“I put her near the front door. It is more sound detection than motion … which I like,” Amazon customer Amy Stewart wrote. “As soon as someone knocks on the door or rings the bell she cackles, “Well well well, we have a visitor!”

You can definitely scare some house guests or trick-or-treaters for just $40 with this spooky crawling Halloween animatronic. The ghoulish prop is 3 1/2 feet tall, with an arm length of over 1 foot.

The creepy figure looks like it’s trying to crawl out from his grave — which is exactly how you could pose it in the yard — with a bloody wide-open mouth waiting to take a bite of any human in its path. With three AA batteries, the zombie’s eyes light up in red, it makes chilling sounds and will slowly crawl forward when touched. While it can be used anywhere, it would be perfect in a graveyard decoration set or just crawling around your porch.

With a grade of 4 stars out of 5, customers say the crawling is the best feature and that it’s super creepy. A few customers say it arrived broken, however, so make sure you check it over when it arrives so you can return it if something is wrong.

This standing grim reaper Halloween animatronic is one of the highest rated on Amazon by customers. It stands at a little over 5 feet tall and runs on batteries once you set up its base. When it detects sound, the reaper’s eyes will light up and it will emit a creepy cackle!

The ease of assembly has been remarked upon by the majority of buyers, who’ve given it a grade of 4.3 stars out of 5. Several reviewers have said it has held up after being kept outside in the elements during the season. The negative reviews have mostly stated that the prop seems flimsy and that the sound-activation sensor is hit or miss, but most have said it’s worth the low price.

This hanging ghost is lightweight and can be hung on a door or wall inside, or on a tree branch or nail. Activated by sound or touch, the ghost’s eyes glow red and she makes creepy sounds. Her arms are also bendable, so you can position them however you’d like.

With more than 200 reviews so far, 61% of customers give it a perfect score. They say the ghost is creepy, scary and loud, but many say it’s smaller than you’d think. A few others say it arrived broken, so you’ll want to make sure you open the box and look it over so there’s time to return it and get a new one before Halloween.

“Creepy” is definitely the best way to describe this animatronic doll. The doll, whose name is Holly, has pivoting wheels that allow her to glide from room to room, pursuing your Halloween party guests. If she runs into a wall, the wheels automatically back her up and turn, letting her keep on rolling with no assistance needed.

Activated by sound and touch, the doll is about 2-feet tall, but covered in 4 feet of fabric. She also has synthetic hair, ghoulish hands and red LED eyes. Holly also speaks a series of phrases, like, “Mommy, I can’t find you,” and “Mommy, I can’t hear you.”

More than 400 customers give the doll a full five-star rating, saying she is creepy, scary, loud and a great addition to Halloween decor. A few people mention that while she works well on hardwood and tile, she struggles to move around on carpet, so if you only have carpeted floors, you might want to keep that in mind. Click into the review from Amazon user Jessica H. to see a video of Holly in action!