This massive snake is more than 18 feet long! 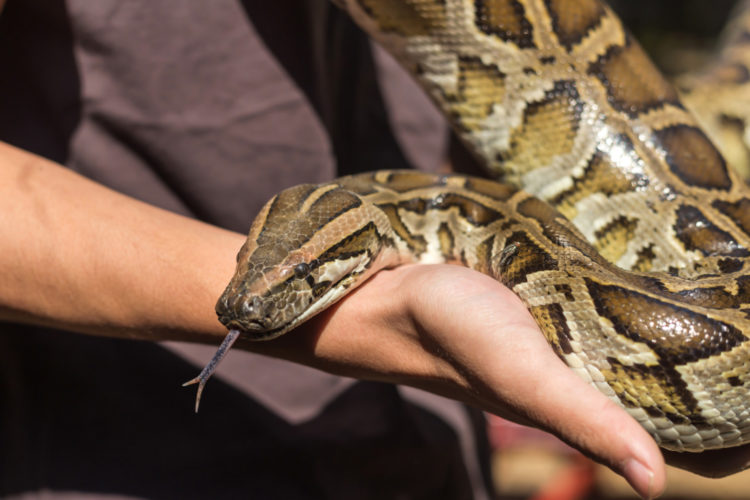 Florida residents and visitors might expect to see the occasional alligator on a golf course or beach and perhaps even lizards falling from trees now and then, but a recent wildlife encounter in the Sunshine State is one for the record books.

SWFMD tweeted a photo of the snake along with two of the agents.

South Florida’s Python Elimination Program was created to help the state deal with invasive snakes that are not native to the region. Originally kept as pets, the snakes were either released or escaped into the wilderness and continued breeding (female pythons can lay up to 100 eggs at a time). The predators have become a severe threat to Florida’s native ecosystems, preying on small wildlife and competing for food with larger animals. They are said to have a breeding population in the tens of thousands.

“Burmese pythons have established themselves as an apex predator throughout the Greater Everglades Ecosystem, and they literally are eating their way through native wildlife,” Rob Moher, president and CEO of the Conservancy of Southwest Florida, said in an FWS statement. “We have to stop their population growth and protect native animals before it’s too late, but I’m encouraged that our research team and partners have identified a viable way to reduce the number of adult Burmese pythons in critical areas.”

A Twitter post from Everglades Holiday Park congratulated the snake catchers and thanked them “for doing your part in protecting the Everglades ecosystem.”

Along with Burmese pythons, the snake hunters seek to remove several other invasive snake species, including the following.

The team works to euthanize destructive snakes humanely. So far, they have removed more than 5,000 Burmese pythons from the wetlands.

As for the record-breaking python, this snake’s skin will reportedly go into making special footballs for the 2021 Super Bowl in Tampa.

Interactive map shows which tribal land you're living on