I once went to a birthday party with a “cell phone valet” at the door—a decorated box where we guests had to, you guessed it, place our phones inside upon arrival. I thought it was a brilliant, yet bold, idea, especially in cell phone-addicted L.A., where I live. (And guess how many people “skipped” the valet! Most!) Now, with IKEA’s new placemat, “Logged Out,” complete with a cell phone-shaped pocket, no cell phone valets are necessary.

I have mixed feelings about this new placemat-turned-phone-mat, which is part of IKEA’s new dinnerware collection, SITTNING (due out in September). It’s a clever idea, yet also a sad reflection on society—do our phones even have to be on the table? Can’t they be stowed in our purse or pockets for the duration of the meal? Do we really need them at dinner with us, literally, sitting in their own seats, of sorts, to check between courses or bites? 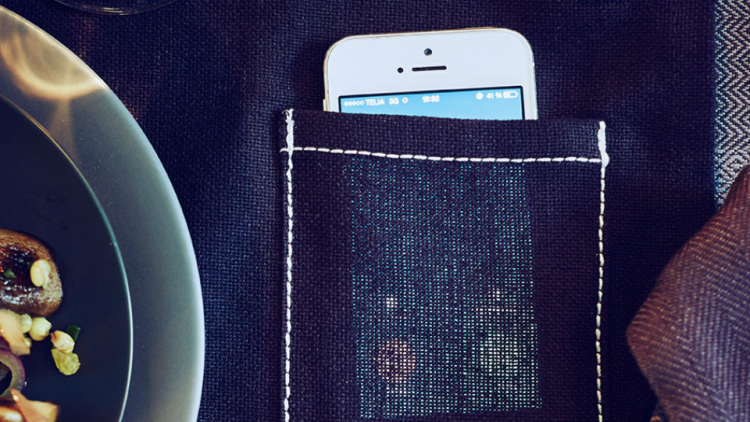 I suppose “Logged Out” is better than having phones in plain sight, but with the phones so close, I wonder if one’s cell will spend more time tucked inside the placemat or in people’s hands. (Perhaps people will abstain from their phones since it will be blatantly obvious if they remove theirs, but I am not convinced. Plus, the pouch is transparent, promoting distraction, so I’d recommend people turn their phones upside down when hiding them. (I guess a plus side to the placemat is having one’s phone easily accessible for those must-take food photos for Instagram and Facebook. I can’t argue with that—in moderation, of course.)

The “let-me-just-check-my-phone-really-quick” temptation is real, everyone—and I know we all know people who have separation anxiety when they’re away from their phones. (I actually gave up texting years ago, so I don’t mind being away from my cell for hours at a time, but I know many people do not agree with my no-phone-just-be-present-and-in-the-moment mindset. Believe it or not, your phone will be there for you later, even after you’ve ignored it for hours on end when you chose to communicate with three-dimensional people instead of avatars. Just sayin’!)

Instead of “Logged Out,” I would rename the concept “Shut Down” and not invite cell phones to dinner in the first place