When you think of Italy, all its delicious foods come immediately to mind. I was lucky enough to travel there for my honeymoon, and I largely subsisted on gelato, wine and, of course, plenty of pasta.

One thing I learned there is that dishes are incredibly regional. Menus can be entirely different based on which part of the country you visit, as well as what time of year. If you want to look super-cultured next time you dine out at an Italian restaurant, you can impress your friends with your knowledge of which pasta dish hails from each city or region of Italy thanks to this handy map posted by Redditor Sticcia from the site Taste Atlas.

Check it out below: 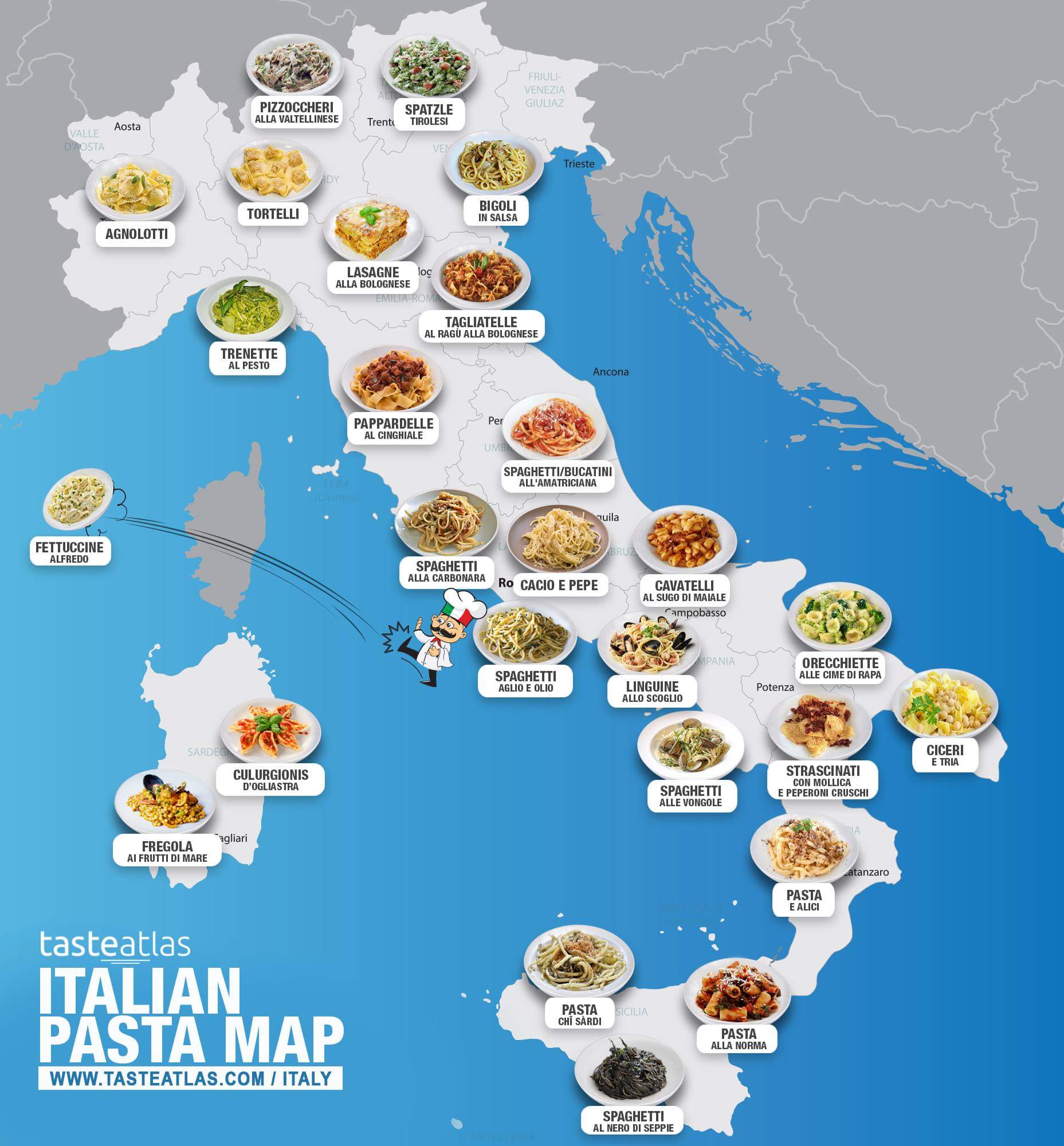 Here’s a breakdown of each dish and its place of origin on the map.

Bigoli in salsa is a Venetian dish consisting of whole wheat spaghetti in anchovy sauce.

Sometimes likened to a grown-up version of mac and cheese, Anthony Bourdain’s favorite pasta dish (yes, really) cacio e pepe hails from Rome. “Cacio” is the local Roman dialect word for Pecorino Romano, a sheep’s milk-cheese that is made in the area. And “pepe,” you probably guessed, is pepper!

Although there are conflicting accounts of where spaghetti alla carbonara truly originated, it became famous in Rome. The dish comprises egg yolks, Pecorino Romano cheese and guanciale (cured pork jowl).

Versions of the simple dish of spaghetti aglio e olio — featuring red chili pepper, garlic and oil — can be found throughout Italy. But is believed to have first originated in Lazio.

This pasta with meat sauce can be found throughout southern Italy and originated in the small region of Molise, famous for its pasta and extra virgin olive oil. The ragu sauce comprises pork and sausages, as well as onions, and should be served with cavatelli.

The shellfish-packed pasta dish comes from the coastal region of Campania, where fresh seafood is plentiful. This dish is also often called “linguine ai frutti di mare,” which means linguine with sea food. It doesn’t have a precise recipe but will include the fresh catch of the day, typically mussels or baby squid.

This simple pasta dish from the region of Basilicata features crumbled red peppers, as well as anchovies and garlic.

The city of Lecce in the Apuglia region is home to this dish made with chickpeas and tagliatelle pasta. Uniquely, some of the tagliatelle (called “tria” in local dialect) are fried for this dish.

The dish of pasta, anchovies and toasted breadcrumbs comes from Calabria and was often eaten on Christmas.

This pasta dish with sardines is believed to be one of the original dishes of Palermo, the capital of Sicily. Ingredients include sardines, anchovies, raisins, pine nuts and saffron.

This squid ink pasta dish comes from the Catania area in Sicily. It can surprise diners with its dark black color — that’s the ink!

This buckwheat pasta with potatoes and cabbage (or Swiss chard or green beans) hails from the Valtellina valley, north of Milan.

Prepared throughout the region of Trentino-South Tyrol, spatzle tirolesi is the Italian version of German spatzle. It takes its green color from boiled spinach.

One of the original stuffed pastas to come from northern Italy, agnolotti originated in Piedmont. It looks a lot like ravioli, but is made by one layer of dough folded over itself, rather than two layers pressed together.

Tortelli is another type of stuffed pasta popular in Lombardi. (Not to be confused with another dish called tortellini!)

Typical of the Emilia-Romagna region, this lasagne is topped with bechamel sauce and a rich meat sauce (ragu).

This pasta, which is topped with pesto sauce and sometimes includes potatoes and greens beans, comes from the Liguria region.

A signature dish of the city of Bologna, the ragu meat sauce is the key. Only a flat noodle should be used like tagliatelle — not spaghetti!

Together with cacio e pepe and carbonara, this dish is considered part of the “holy Trinity of Roman pasta” and is named after the town of Amatrice, a town northeast of Rome. Its decadent sauce is made from diced tomatoes sautéed in the fat of guanciale (cured pork jowl).

This popular pasta and clams dish comes from the city of Naples.

The region of Puglia is known for its pasta with broccoli rabe. Orecchiette pasta should be used, which translates to “little ears.”

This Sicilian dish is named after “La Norma,” an opera composed by Vincenzo Bellini in 1831. He used to frequent a restaurant so often that it decided to name a pasta dish after him. Its ingredients are eggplant, fresh basil and ricotta cheese .

One interesting detail about the Taste Atlas map is that it shows a chef kicking fettucine alfredo away from Italy altogether, ostensibly implying that the dish is not authentic and doesn’t belong with the likes of the other types of pasta on the map.

While the idea for the classic comfort cuisine may have originated in a Roman restaurant ran by Alfredo Di Lelio (hence the name), it didn’t take off in the form most of us know it as until it hit the United States!

Did your favorite type of pasta make the list?