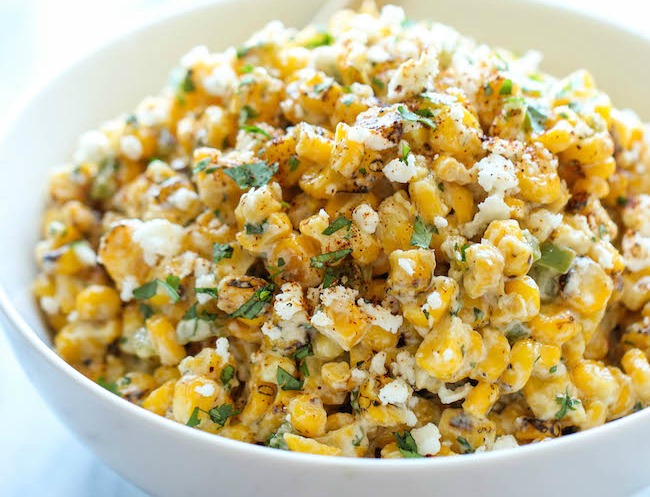 Summertime is peak corn-eating season. We’re grilling it at our barbecues, boiling it on the stove, throwing it into giant pots of seafood and potatoes.

In recent years, elote (aka Mexican street corn) became a trendy way to jazz up corn on the cob. But did you know there’s a cob-free version that you can make in bulk and snack on to your heart’s content?

It’s called esquites — all the same ingredients as a good elote, but in a big bowl. Food blog Damn Delicious shared a recipe, dubbed “Mexican corn dip,” and it’s super easy to put together!

Obviously, you’re going to want some corn. Damn Delicious blogger Chungah Rhee suggests using whatever you’ve got: canned, frozen or freshly roasted. She heats the kernels with jalapeño and a good chunk of butter until they’re piping hot and even a bit charred, but still tender.

Next comes the fun part: the toppings! Traditionally, elote features a slather of mayonnaise, a heavy shake of chili powder and crumbles of cotija cheese. Generous garnishes of cilantro and lime juice are key, as well.

Rhee also adds in a clove of garlic for an extra punch of flavor. She mixes all of the above into the hot corn and that’s the dish!

Now, I know some of you have issues with mayonnaise. According to Bon Appetit, butter works as a substitute for the mayo on elote. The Damn Delicious corn dip already uses butter, so maybe just add a bit more with the other toppings if you can’t stand the white stuff.

Rhee also notes that this corn dip doesn’t need to be a dip at all. It’s ready to eat as is, no chips required. Snarf it with a spoon! I can also see it working as a vegetarian filling for soft flour tortillas.

Here’s the full recipe. Give it a shot this summer!