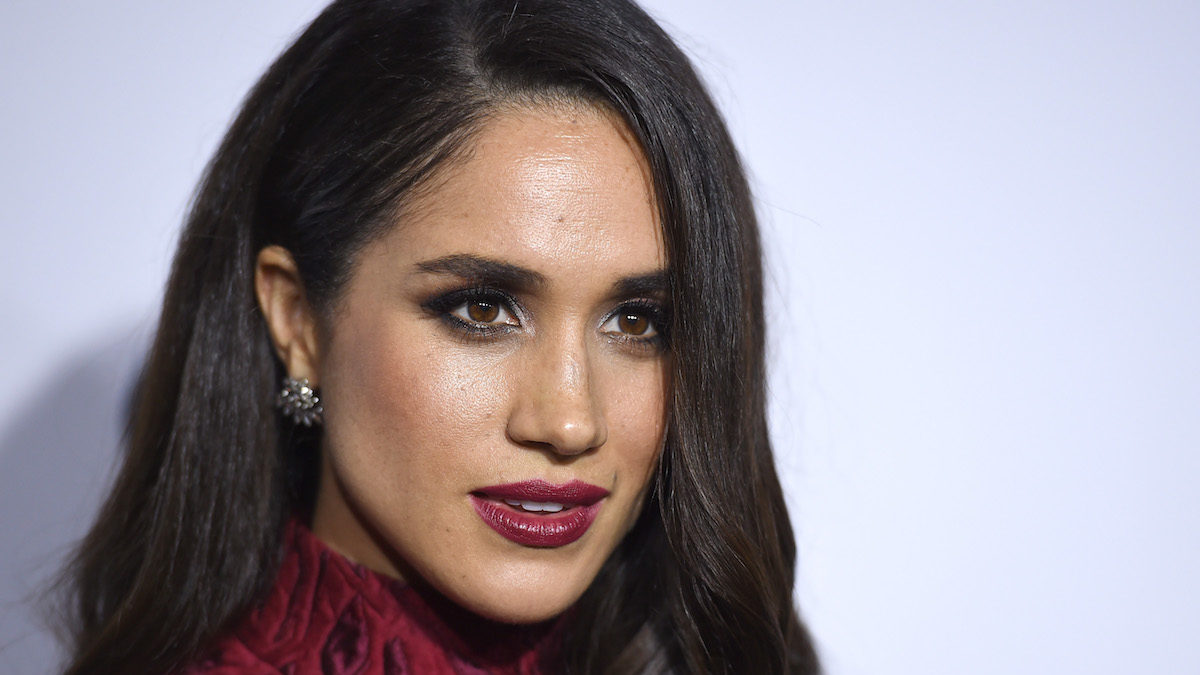 It’s hard to imagine Harry without Meghan today, but it wasn’t so long ago that the Duchess of Sussex was a Hollywood actress, working the red carpet circuit with her fellow celebrities. Before she met her prince, Markle had a role in the TV show “Suits” and spent most of her time in Canada, where the show was filmed. Let’s take a look back at Markle’s public appearances before she married into the British royal family and became a mom.

Markle joined the cast of the USA Network legal drama “Suits” in June 2011 to play Rachel Zane, who was initially a paralegal and eventually became an attorney. And with the TV role came the red carpet appearances. In January 2012, Markle attended the Weinstein Company’s 2012 Golden Globes after-party at the Beverly Hills Hilton in Los Angeles.

In September 2012, Markle was a guest at the Producers Ball 2012 at the Shangri-La in Toronto, Canada. The event is known as the unofficial kickoff to the Toronto International Film Festival (TIFF). Markle lived in Canada for nine months of the year due to her role in “Suits” and called herself an “adopted Canuck.”

Another TIFF 2012 event Markle attended was the 13th Annual InStyle and Hollywood Foreign Press Association party. At this point, Markle was separated from her first husband, producer Trevor Engelson. They met in 2006 and dated for six years before marrying in Jamaica.

Markle posed on the red carpet with Gabriel Macht, her co-star on “Suits.” Of course, neither of them had a clue that a few years later, Macht would attend Markle’s wedding to Prince Harry at St. George’s Chapel at Windsor Castle. Other “Suits” co-stars, including Patrick J. Adams, Gina Torres, Sarah Rafferty, Rick Hoffman and Abigail Spencer, were at the ceremony on May 19. 2018.

Celebrities flocked to the Skybar at the Mondrian Hotel in West Hollywood, California, in November 2012 for TV Guide Magazine’s Hot List Party. Markle attended alongside the likes of Jimmy Kimmel, Adam Levine, and stars from “Pretty Little Liars,” “The Walking Dead” and “The Vampire Diaries.”

InStyle approved of Markle’s look for the event, noting that she “debuted a darker hair hue and paired the new look with a charcoal smoky eye and a neutral glossy lip.”

In December 2012, Markle attended the 3rd Annual Witness Uganda Concert in Los Angeles. She was snapped with lots of fellow celebrities and also talent manager Andy Corren. At the time, “Suits” season two was airing on USA Network. That year, Markle took part in an anti-racism campaign video for U.S. charity Erase The Hate, talking about the racial slurs she’s heard over the years and revealing that her mother, Doria Ragland, has been called the “n-word.”

In January 2013, Markle attended the NBC Golden Globes After Party at the Beverly Hilton Hotel in California. That year, Markle and her “Suits” costar Patrick J. Adams were interviewed by Larry King.

When King asked her about her growing fame, Markle said, “I mean, of course, it’s so flattering. It’s so lovely and at the same time, I think it’s an eye opener that our lives have really changed. You know, to go from having some anonymity to now, the privacy is gone. But it’s great that the show is so successful and that’s part of what comes with it.”

Later in January 2013, Markle made an appearance at Elle Women in Television Celebration in West Hollywood, California. Around the same time, she gave an interview to Esquire U.K., in which she shared her appreciation for British men.

“I love how British guys dress for the cold,” she told the magazine. “I’m from L.A. so I’m used to seeing people in sunglasses and flip-flops. There’s something so romantic about a man in a scarf and a knitted hat.”

Markle attended the USA Network Upfront in New York in May 2013. Her celebrity star was on the rise, and she’d also become a dog mom. Markle told Buzzfeed that it was all due to Ellen DeGeneres.

“He’s a little rescue mutt from SPOT in LA and is 9 months old,” she said. “He’s adorable. Ellen DeGeneres was there when I was looking at him and told me I had to take him home. So I did. It’s like if Oprah told you to do something, you just do it!”

Self Rock The Summer

In July 2013, Markle was a guest at Self Rock the Summer in New York. Around the same time, she shared some diet and fitness secrets — and her love for cooking — with Shape.

“Every day I’m cooking something, even if it’s just making a pesto I can put in the fridge for later in the week,” she said.

In September 2013, Markle attended the Herve Leger collection presentation during Mercedes-Benz Fashion Week in New York, and was photographed with model Petra Nemcova. Her appearance came only a few weeks after Markle’s divorce from Engelson was finalized. The actress was still working on “Suits,” which was now in its third season.

Shortly after her NYFW appearance, Markle attended the Annual Charity Day hosted by Cantor Fitzgerald and BGC Partners. As always, she looked incredible on the red carpet. But even the future Duchess of Sussex had her wardrobe wobbles during this period.

“Meghan Markle sent me a text message from New York’s Bowery Hotel in September 2013,” fashion insider Elizabeth Tuke wrote for Harper’s Bazaar in 2018. “She was scheduled to attend the Novak Djokovic Foundation gala later that evening and was struggling with a dilemma most women experience at one time or another: She had absolutely nothing to wear.”

A trip to London, the home of her future royal husband, was on the cards for Markle in November 2013. She attended the world premiere of “Hunger Games: Catching Fire” at a city center cinema. Other stars in attendance were Liam Hemsworth, Stanley Tucci and Donald Sutherland.

During her trip to London, Markle attended another celebrity event: the Global Gift Gala evening at a central London hotel on the Strand. Her sophisticated look went down a storm with fashion editors. “Pulling her hair to the side with an extreme side-part, Markle opted for Old Hollywood glam waves and a soft flush,” InStyle noted.

At the event, Markle was interviewed by a British reporter and revealed a love for the U.K.

“It is very cold, but the people are so warm,” she said. “As cheesy as that sounds, I was joking today that I’ve never been called love or darling more in my life so it makes me want to stick around for a while.”

In 2014, Markle attended one of her regular events, Elle’s Women in Television Celebration in Los Angeles. The same year, she started her lifestyle blog, The Tig. But she stayed tight-lipped on her romantic life, not commenting on rumors that she was dating Irish pro-golfer Rory McIlroy. They were seen together several times throughout 2014, enjoying dinner dates in New York City and Dublin, and released a video of them doing the viral ice bucket challenge together.

Markle appeared at New York’s Javits Center in May 2014 for the NBCUniversal Cable Entertainment 2014 Upfront event.

That year, she wrote on her blog about dreaming of being a princess — but a very particular sort.

“Little girls dream of being princesses. I, for one, was all about She-Ra, Princess of Power,’” she revealed while commenting on the “pomp” surrounding Britain’s Prince William and Kate Middleton’s wedding three years earlier, according to Page Six.

“We’re definitely not talking about Cinderella here,” she added.

The singer called 2020 “the worst year I’ve ever known,” and revealed that he hoped the pandemic means “that we have become better people.”

Markle was back at the Javits Center in New York in May 2015 for the annual NBCUniversal Cable Entertainment Upfront event. That year, she became a brand ambassador for Canadian clothing brand Reitmans.

According to YourTango, Markle was in a relationship with celebrity chef Cory Vitiello at this time. The two met after Markle visited one of Vitiello’s many upscale restaurants. Reportedly, the couple were together for two years and shared a townhouse in Toronto.

“To describe something as being black and white means it is clearly defined,” Markle wrote. “Yet when your ethnicity is black and white, the dichotomy is not that clear. In fact, it creates a grey area. Being biracial paints a blurred line that is equal parts staggering and illuminating.”

In November 2015, Markle attended the 12th Annual Council of Fashion Designers of America/Vogue Fashion Fund Awards at Spring Studios in New York. InStyle praised her look, writing that she wore “her long hair in waves with a slight flip and lots of body and complemented her metallic dress with a coordinating smoky eye and a neutral lip.”

Markle was back at Elle’s Women in Television celebration in 2016. This time it was held at the Sunset Tower Hotel in Los Angeles. That year, the magazine honored Priyanka Chopra, Viola Davis, Olivia Wilde, Julia Louis-Dreyfus and Taraji P. Henson as “the women to watch in 2016.” Of course, it wasn’t long before the eyes of the world were on Markle herself.

2016 was a big year for Markle — both personally and professionally. Not only did she meet Prince Harry, her future husband, it also saw the release of her clothing collection with the Reitmans label. Markle told Best Health that she was involved in all stages of the design process.

“I’m really excited,” she told the publication. “It’s the first time I’ve ever designed and we’re launching with a dress collection of four signature, staple dresses.”

In March 2016, Markle took part in AOL’s Build Speaker Series to discuss her role on the television show, “Suits.” According to HuffPost Canada, the actress talked about how she’d used the internet to connect with fans. She even gave a shout-out to one particular audience member by name, running through a list of her accomplishments and personally handing her a letter she wrote.

At the event, which was held at AOL Studios in New York, Markle told the moderator that she feels “a really big responsibility” to use her celebrity status for good.

“If you have this kind of job, and you have an opportunity to have a profile where people are listening to what you’re saying, I really, truly think you need to be saying something that’s valuable,” she said.

Markle posed on the purple carpet at P.S. Arts’ “the pARTy!” at Neuehouse in Los Angeles in May 2016. Two months later, she was introduced to Prince Harry (reportedly through a mutual friend, Violet von Westenholz). The fledgling relationship became public knowledge in October 2016 when a “source” spoke to the Sunday Express newspaper in the U.K., and the rest is history.