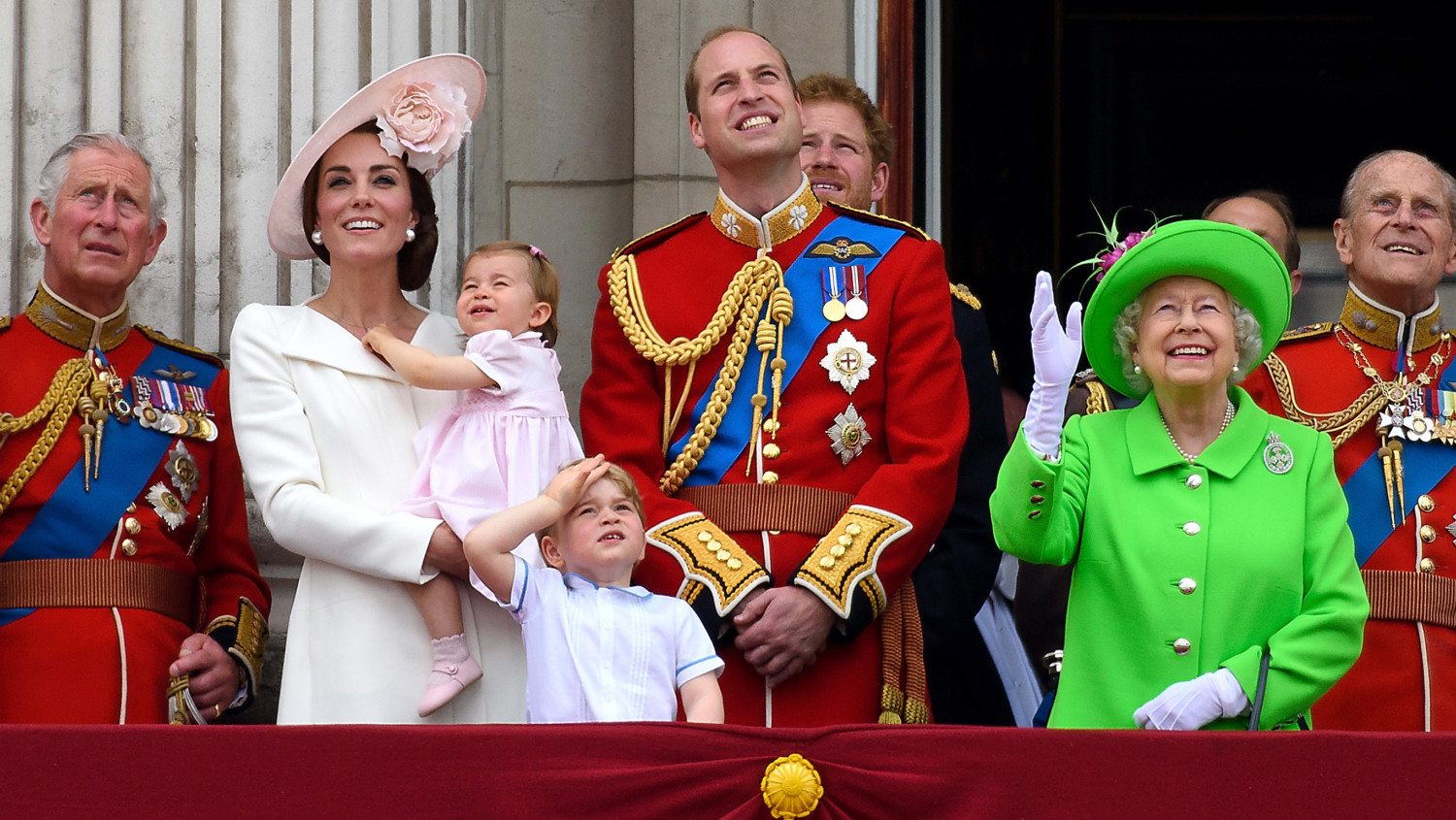 Being a member of the British royal family might look like a dream come true, what with all the castles and tiaras. But with this glamorous lifestyle comes some pretty interesting (and some, dare I say, odd) rules and traditions. From customs governing what they can eat to what they can wear, there are more royal guidelines than you might expect.

While some of these are hopefully not followed too strictly, others most certainly are.

Take a look at 25 of the rules and traditions the British royals must follow.

1. When The Queen Is Done Eating, So Are You

Once the Queen has taken her last bite, everyone has to stop eating. This dates back to Queen Victoria, who ruled from 1837-1901. Protocol back then said that when the Queen was done eating, all guests’ plates were to be cleared for the next course — even if they weren’t finished.

Bridezillas, look away — royal tradition even extends into what’s carried in a bride’s bouquet at a royal wedding. A sprig of myrtle is traditional for every royal wedding bouquet and each royal bride since Queen Victoria has carried it. There’s no telling if soon-to-be royal Meghan Markle will carry on with the tradition, so we will have to keep our eyes on her bouquet!

This isn’t a law, but it’s just simply not done.

According to the U.K. Parliament website, “Although not prohibited by law, it is considered unconstitutional for the Monarch to vote in an election.” Although she may not have a say in the election, the Queen is considered the head of state and does get to invite the the Prime Minister to form a government.

Additionally, members of the royal family are expected to generally keep their personal political opinions to themselves, so as not to be seen as exerting influence.

4. There’s A Formula For Who Gets To Speak First When Dining With The Queen

5. No Monopoly-Playing, Thank You Very Much

OK, this one is more of a joke than an actual rule! When presented with the board game Monopoly while having lunch in 2008, Prince Andrew said, “We’re not allowed to play Monopoly at home. It gets too vicious.” You’re not alone in that, royals, you’re not alone.

6. When A Royal Travels Abroad, They Have To Pack An All-Black Outfit

This one really makes sense, but is — again — more of a custom than a rule. Packing an all-black outfit ensures that if there is a death in the family while they are traveling, they would be appropriately dressed for mourning when they are photographed returning home.

Since the Queen was traveling in Kenya without the appropriate clothing when she learned that her father George VI had died, it’s likely this is a custom she doesn’t forget.

Just like it is in America, where the president and vice president don’t usually travel together, the same goes for the royals. It’s for security reasons: If a plane were to crash with a royal on board, the next in line needs to take their place. Prince William has, however, overridden this protocol in the past and traveled with his son, George.

If you ever get a chance to meet a royal, you may want two things: an autograph and a selfie. Odds are, you won’t be getting either: It is against protocol for the royal family to sign autographs in case the signature could be used against them later.

There have been instances where the royals didn’t follow this rule, but for the most part, you’ll be out of luck if you’re looking for their signature. The same goes for selfies — you might be able to snag one, but the odds are against you. In fact, Prince Harry says he “hates” them.

Autographs and selfies aside, what about a hug? Nope, can’t do that either.

Basketball star LeBron James broke the protocol on this one, putting his arm around the Duchess of Cambridge for a photo. She seemed a little surprised, so it’s probably best to not try this one out.

As for touching each other? Members of the royal family typically don’t show PDA in public — although it should be noted that Prince Harry and Markle frequently hold hands in public and Markle has broken the “no hug” protocol as well.

11. No Garlic For The Queen

When it comes to food, there are other “rules,” too — like what is and is not allowed at Buckingham Palace. The Queen reportedly hates garlic, so it is not used in meals made at the palace. Probably a good idea — we’re guessing the Queen would probably rather not have garlic breath when carrying out her royal duties.

No yoga pants for the Duchess! The Royal Family is to always dress modestly in public, and you’ll almost never catch the royals in casual clothing, like jeans. Tradition dictates that Prince George always wear shorts and there is even a rule as to when Queen Elizabeth wears a hat.

As for those bright colors the Queen commonly wears? That’s to make sure the public can see her in crowds.

Speaking of dress code, tiaras are reserved for married women of the royal family.

“The old rule is that hats are never worn indoors at 6 p.m., because that is when the ladies changed into evening dress, and tiaras and the family jewels would come out,”According to Diana Mather, a senior tutor for The English Manner etiquette consultancy.

There are actually a lot of rules concerning the tiara, like making sure it’s angled just right.

14. The Queen Eats The Same Breakfast Every Day

This is not a rule so much as a time-honored personal preference. English breakfast tea begins the Queen’s breakfast (duh), but it is then followed by something you might find surprising — cereal. Cornflakes, to be more specific!

The Queen also enjoys Marie cookies (or biscuits) and foods like apricots, prunes and macadamia nuts accompany her cereal.

Having to accept gifts — what a problem, huh? In all actuality, though, some of the presents the royals receive can be a little odd, to say the least. Would you be able to kindly accept 12 boxes of mangoes? What about a doctoral thesis or a miniature throne from “Game of Thrones?” You can see how this could get tricky.

16. The Queen Spends A Week Preparing For Christmas

While perhaps more of a tradition than a rule, this is one we can get behind. Preparing for the holidays takes a lot of work! Christmas festivities for the Royal Family are held at the Queen’s country home, and she and Prince Philip usually head there the week before Christmas to prepare.

17. The Royal Family Is Expected To Learn Multiple Languages

Most members of the royal family speak at least a few different languages, with Queen Elizabeth being fluent in French.

Prince George is even on board — he can count to 10 in Spanish!

18. Don’t Turn Your Back On The Queen

When a conversation is over, the Queen will leave first. No one else in the conversation is allowed to turn their back on the queen and walk away — even if they’re done talking. Guests should also never leave an event before a royal, unless they’ve been given special permission.

19. Royal Women Are Expected To Sit A Certain Way

Ladies in the royal family should sit with their knees and ankles together and only cross their legs at the ankle if needed.

You may notice the Duchess of Cambridge tends to sit with her legs slanted, and so did Princess Diana. That pose is now named after the Duchess, coined the “Duchess Slant.” Meier says it is the perfect pose when a camera is in front of you because when your legs are angled, the camera only shoots the sides of your legs, protecting your modesty. It looks like Markle has quickly picked up on this style of sitting as well.

20. Where The Queen Puts Her Purse Tells Her Staff What To Do

This one is pretty genius, we must say. The Queen uses her purse to send her staff signals when she wants to get out of a conversation. If she puts her purse on her right arm while talking to someone, her staff is expected to end the chat.

If she really wants to get out of there, she spins her ring, telling her staff she’d like to make a quick escape. It’s also been said that if the Queen puts her bag on the table at an event, she’s ready to leave.

The Queen isn’t the only one who uses her purse in a clever way — Princess Diana did, too. Diana used her clutches to hide her cleavage when exiting a car and wearing a low-cut outfit. She used the trick so much, the woman who designed the purses called them “cleavage bags.” So smart!

22.  Please Stop Calling  The Duchess of Cambridge “Princess Kate” — That’s Not Her Name!

The royal family prefers to be called by their formal names, so “Kate Middleton” should be a thing of the past. But many of us, including most of the media in the United States, still refers to her as such. Her official title is Catherine, Duchess of Cambridge, and we should all be referring to her like that.

While she is a duchess, she is also a princess through marriage to marriage to William. Given that the title Princess William of Wales is rather old-fashioned (as it only refers to her husband’s name, not her own), it’s not commonly used.

She cannot be called Princess Catherine, because that designation only comes through birth on the male line — hence Princess Charlotte (William’s daughter) and Princess Eugenie and Beatrice (Prince Andrew’s daughters).

Is all this very complicated? Yes. The point is, stop calling her “Princess Kate”!

Royal family members pinch the tea cup handle with their index finger and thumb, while their middle finger holds the bottom. Meier, the royal etiquette expert, told People that the handle of the cup should also always be kept at 3 o’clock.

Also, if you’re a woman, you should try to take a sip from the same spot each time to avoid getting lipstick stains on the rim. So many rules just for a cup of tea!

24. The Queen Doesn’t Have To Have A Driver’s License

This isn’t so much a rule the Queen follows and more like one she doesn’t have to follow! The Queen is the only person in the U.K. who isn’t required to have a driver’s license. Driving licenses are issued in her name, but she can drive without one if she chooses. She also didn’t need to take a driving test and can drive a car without a number plate.

The Queen was actually trained as a mechanic in WWII and is reportedly the only British monarch in history to be properly trained to change a spark plug.

If there is one thing most of us can agree on, it’s that dogs are the best. It’s no secret the Queen feels the same way and loved her corgis. Unlike our pets, however, the royal dogs have a tradition of eating gourmet meals prepared by a chef and hand-delivered by a footman. Talk about service!

According to the book “Pets by Royal Appointment,” the Queen’s beloved corgis were fed at 5 p.m. each night and ate a filet of steak and chicken breast. Sadly, the last corgi belonging the queen passed away on April 15, 2018. She still has two “dorgis,” or dachshunds bred with corgis, to take care of.

Would you be able to keep up with all these rules if you were a member of the royal family? Which one did you find most fascinating?