As a 15-year-old girl told a courtroom in New York City the story of how she was repeatedly abused by her father, Rose, a Labrador Retriever nuzzled her hand during stressful moments. The unnamed teen refused to testify unless Rose was present, and thanks to the dog’s presence, the girl’s testimony put her father in prison for 25 years, according to the New York Daily News.

Saying that testifying against an attacker is difficult would be the understatement of the decade.

Ellen O’Neill-Stephens, a retired prosecutor, told Upworthy that the court system’s alleged attacker vs. victim dynamic allows the defendant to seek a fair trial and address the claims the victim is making, but at a huge cost to the victim’s mental health.

“When a person is reliving a traumatic event, they experience physiological reactions similar to what they had when the event was taking place,” O’Neill-Stephens said. “This adversarial system [of testifying in front of your attacker] is brutal. A lot of people come out damaged by it.”

Sex-abuse victims are often told by police that they will be heavily questioned if they take their claims to court. Unfortunately, the idea of reliving the abuse often keeps many victims from coming forward, according to an investigation by The Guardian.

In order to make the experience just slightly less traumatic for victims, O’Neill-Stephens and Celeste Walsen, a professional veterinarian, founded Courthouse Dogs, an organization that advocates for bringing more dogs into the criminal justice process, according to Upworthy. Specifically, O’Neill-Stephens and Walsen want to allow victims access to specially trained service dogs during their testimony in the courtroom, but also in child advocacy centers that specialize in abuse and during prosecutor interviews outside of the courtroom. 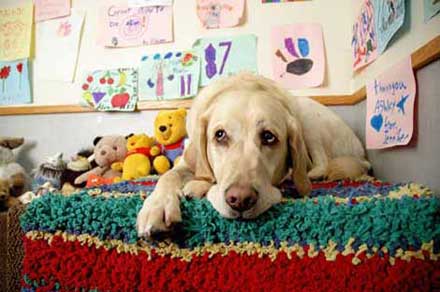 O’Neill-Stephens said that the dogs help provide a calming presence to survivors of trauma, because we often rely on animals to predict dangerous situations and pick up on bad people. The dogs can curl up on a couch next to a child who’s being interviewed by a prosecutor, or they can lay down and sleep peacefully at the feet of a witness on the stand in front of the courtroom. Walsen said that when we’re in the presence of a relaxed dog, we often feel like we’re in a safer place, which can lower our blood pressure and reduce anxiety.

Courthouse Dogs was founded in 2004 and now employs 87 dogs—mostly Labradors and Golden Retrievers—in 28 states, according to Next Shark. The dogs are trained for two years before they’re allowed to go out in the field. Stephens said she hopes the dogs will eventually be available to anyone in courtrooms throughout the world, whether they’re innocent, guilty, young, or old.

“I used to think, when I went into the courtroom, I was supposed to make the witnesses squirm, uncomfortable, so they’d somehow blurt out the truth,” O’Neill-Stephens told Upworthy. “But now I’m telling judges, that technique doesn’t work.”

O’Neill-Stephens and Walson said young victims will sometimes shut down during interviews, especially if a parent can’t be there. But if they bring in a dog, the child will often start petting it and will become relaxed enough to start talking. 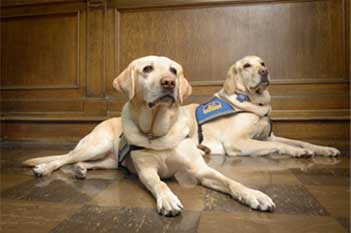 Some defense attorneys have started to challenge the use of dogs in courtrooms, because they argue that it’s prejudicial against defendants. But in any case where such a challenge has been presented, judges have continually supported the use of dogs, according to the New York Daily News.

“‘Dogs are such agreeable friends, they ask no questions, they pass no criticisms,’ but do they belong in the courtroom?” wrote New York Appellate Court Justice Sandra Sgroi in one such case, quoting the English writer George Eliot. “We conclude that this question should be answered in the affirmative.”

Ideally, O’Neill-Stephens and Walsen would like to see dogs provided to anyone involved in stressful courtroom proceedings, including the defendant. Often, there is only one small price to pay for the comfort some dogs can provide to witnesses during long testimony, O’Neill-Stephens told the New York Daily News:

“The biggest problem with our dog is that she snores.”