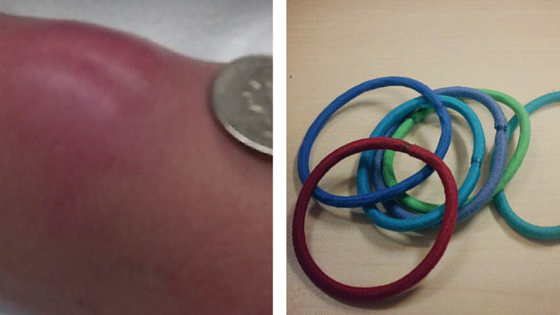 My mother always told me that wearing a hair-tie around my wrist wasn’t good for me. But why? It’s easy and convenient to keep a tie on my wrist. But after learning about Audree Kopp’s story, I now have reason to believe she’s right.

When Audree was moving her belongings from one home to another she noticed a red bump on her arm, where her hair-tie rests. Thinking it was a simple spider bite, she ignored the swelling and continued to move into her new home.

Related: 31 Everyday Things That Are Dirtier Than You Could Ever Imagine

But then the bump got bigger. And bigger And bigger. “It just kept getting bigger and redder, and worse,” Kopp said to WGAL, as reported by Refinery 29. She saw a doctor who put her on a round of antibiotics, but the swelling didn’t go down.

It was at that time she decided she needed to go to the emergency room. “They said I needed surgery,” Audree said to CBS Philly. “Thank god I caught it in time or I could have had sepsis.”

Dr. Amit Gupta of Louisville, states in the video interview that the infection was most likely caused because bacteria from the hair tie got under her skin.

While rare and odds are low,  Dr. Gupta says to “be careful, you can’t put all these hair ties around the wrist…because it can cause problems and infections under the skin.”

Can’t live without your hair tie? Consider getting one of these fun bracelets, designed specifically to hold you hair tie, without damaging your wrist: