If you ever spot Anne Hathaway in real life and want to get her attention in a positive way, here’s one way to do it: … Kelly Clarkson is a queen. The singer who got her start as a contestant on “American Idol” in 2002 continues to amaze fans around the … The Backstreet Boys have new music out. And if that sentence wasn’t enough to get your attention, this certainly will be: To promote their new … Many kids headed back to school or started school for the first time this week, and their proud (and sometimes relieved) parents took to social …

Ever spot a celebrity, freak out on the inside and then debate whether to ask for a selfie? More specifically, what would you do if …

Read moreJimmy Fallon Paid The $1,136 Restaurant Bill For These Couples On June 3, the seniors at Marjory Stoneman Douglas High School got a happy surprise when Jimmy Fallon showed up to make a commencement speech … Jimmy Fallon never disappoints as the host of “The Tonight Show Starring Jimmy Fallon,” and it’s hard not to have an amazing episode when your … When it comes to celebrity couples, there are some who just seem perfect for each other. (We’re looking at you, Dax Shepard and Kristen Bell!) Actors John Krasinski … If you’re over a certain age, you probably know all the words to the “The Fresh Prince of Bel-Air” theme song. But there’s one person … Try as you might, it can be next to impossible to get the songs from your kids’ favorite movies and TV shows out of your … After losing his mom, Gloria, Jimmy Fallon returned to work at “The Tonight Show” on Nov. 13. The entertainer took the opportunity pay tribute to … On Nov. 4, “The Tonight Show” host Jimmy Fallon lost his beloved mother, Gloria Fallon. Tapings of his show were cancelled for the following week, …

No one knows Kelly Clarkson’s songs better than Kelly Clarkson. So when she was challenged to sing one of her songs on “The Tonight Show” …

Read moreKelly Clarkson Tried To Sing ‘Since U Been Gone’ Backwards, Hilariously Failed 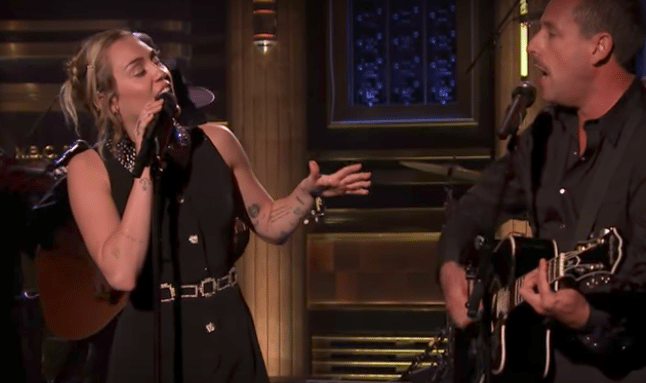 On Sunday night in Las Vegas, a gunman killed at least 58 people and injured more than 500 others at a country music concert. Americans are … Jimmy Fallon’s latest skit on “The Tonight Show” will make you laugh until you cry—and that’s exactly the point.

If you’ve seen the hit drama “This is Us,” there is no doubt you had at least one cry in the first season (or every episode) and maybe a few during the season 2 premiere on Sept. 26. We’ll refrain from new season spoilers, but if you’re familiar with the show, you know that shedding a few tears is pretty much inevitable.

But while we can all cry privately in our living rooms without embarrassment, what about the people on set? How do the sound people and the directors behind the scenes manage to get through the raw emotion in the room without tearing up (or full-on sobbing)?

Well, this hilarious skit tackles that problem, casting Fallon as a boom operator on the show who just can’t seem to contain his emotions.

Spoiler Alert: If you haven’t finished season 1, you might not want to continue reading. Also, finish season 1! The rest of you, watch this funny video:

During an emotional scene between the characters Randall (Sterling K. Brown) and Kate (Chrissy Metz), Fallon’s character is just like the rest of us and simply can’t hold back the tears.

“I’m the reason that dad died and we all know it,” Metz says in the scene. “And it’s not something you can forget or get over.”

We’d go beyond just “crying” and say Fallon is in a full-on ugly cry pretty much instantly. The rest of the crew is annoyed at first and after more than 20 takes, Metz even walks out, only for Fallon to call her a diva and say, “You’re the reason dad died.”

Hilarious! And way too relateable.

It’s all good in the end, though, with other people on set joining in on the cry session, including both actors and even Milo Ventimiglia, who plays Jack, their father.

It’s now official that no one is immune to the drama that plays out on set and our TV screens on Tuesday nights. You can catch “This is Us” on Tuesdays at 9 p.m. EST on NBC or streaming on Hulu. Music can be a healing force. Research has shown that those who undergo music therapy can have improved health outcomes whether they’re premature babies, depressed … As you might imagine, an Adele/Alicia Keys mashup equals absolute amazingness. Even when Keys has to play the part of both ladies. Keys recently appeared on …