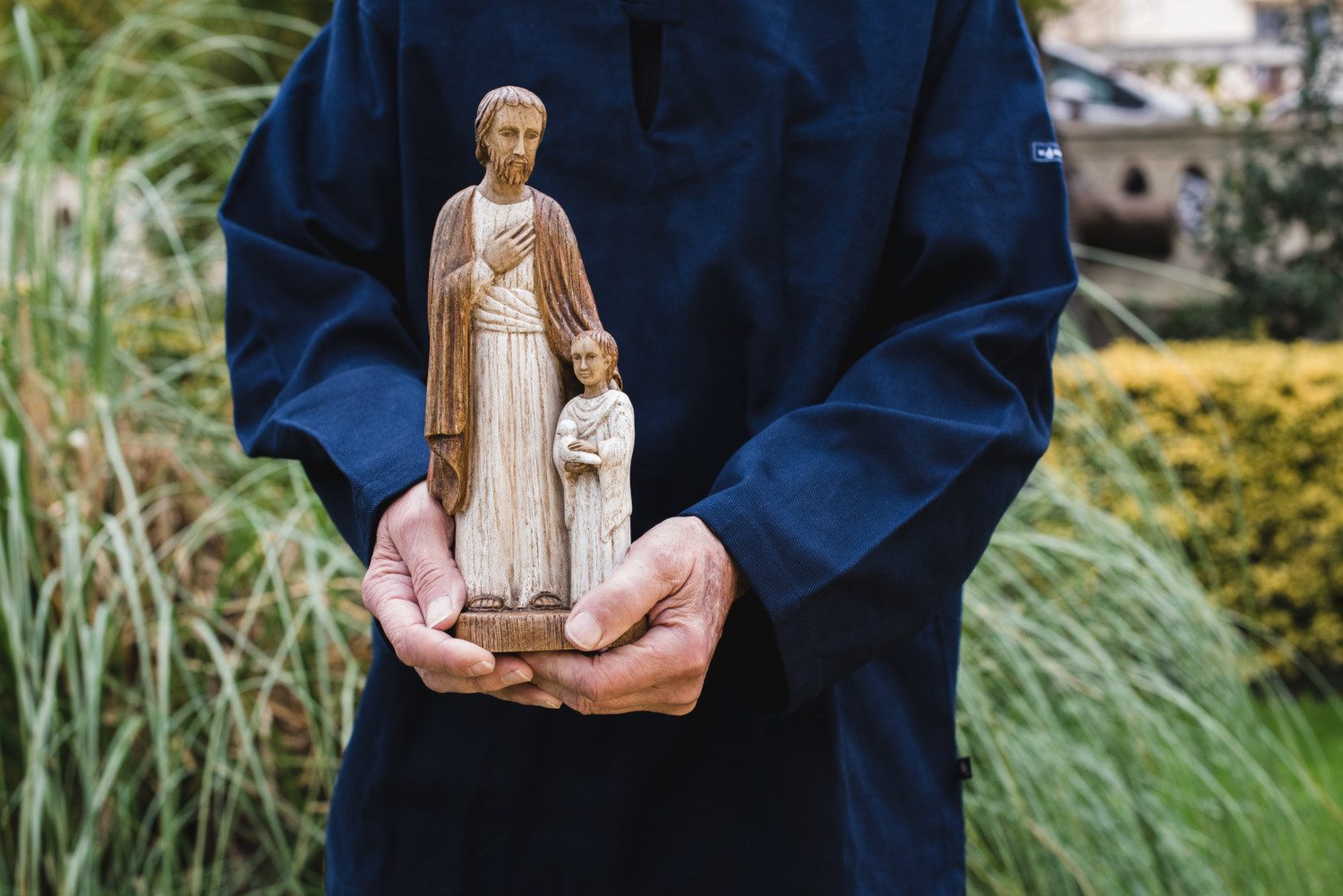 We’d been in our new house for just a few weeks when my husband found a gallon-sized zippered bag buried in the backyard.

The previous owners had a young son, so we’d been finding all sorts of buried treasures in the flowerbeds and under the deck, but this was a decidedly different find: There was a little statue of a man holding a child in the bag. It looked like the kind of figure you might find in a nativity scene, and I guessed he was most likely a saint, as I had seen similar statues in a religious goods store.

Not being Catholic or particularly religious, I had no idea who he was — or why he might be buried in my backyard.

Turns out, it was a statue of St. Joseph (with, presumably, a young Jesus, since the Joseph we’re talking about here was that Joseph — you know, Mary’s husband?), and his purpose was to help the house sell faster. In the Catholic tradition, St. Joseph is the patron saint of workers and fathers, among other things. The legend of St. Joseph’s real estate prowess has earned him everything from a Snopes entry to dozens of anecdotes across the internet.

As Snopes notes, no one knows exactly when the custom of using a St. Joseph statue to help sell a home became popular, but he seems to have reached widespread use in the U.S. around 1990, “with realtors buying plastic saints’ statues by the gross.”

Though the people we bought our house from didn’t follow the St. Joseph legend exactly (more on this below), we did make an offer on their house within a few weeks of it going on the market. Was it St. Joseph’s influence? We’ll never know, but they had put the house on the market previously with no luck.

Here’s how the process generally goes:

How you bury him depends on which source you consult and your own preference, but the most frequently mentioned method is that he should be buried upside down in the front yard, facing the house. This placement assures he will work hard to sell the right house. For condo dwellers and those who don’t have a yard, bury St. Joseph in a pot near the front door. You can wrap him in protective cloth or put him in a bag, as the previous owners of our home did, to keep him protected from the elements. (It also seems more respectful.)

And no, you don’t have to be Catholic or even a Christian to put your faith in St. Joseph. Author and homeowner Erica Orloff describes herself as “an atheist, or at least a very cynical agnostic,” but she grew up with the traditions of her grandparents’ Catholic faith.

“I have my grandparents’ crucifixes on my walls and carry Mass cards and assorted Catholic items in my purse,” she told me. “So it felt like a natural thing to me, a cross between superstition and a talisman.”

She buried St. Joseph in the yard after her home languished on the market for eight months. The result? “It sold in an all-cash deal in under a week,” she said.

It doesn’t seem to matter how you pray, as long as you pray for St. Joseph’s help, and most of the St. Joseph home sale kits include a prayer card to help those of us who aren’t practicing Catholics.

Here’s an example of a prayer to St. Joseph, from the website Roman Catholic Man:

“O, Saint Joseph, you who taught our Lord the carpenter’s trade, and saw to it that he was always properly housed, hear my earnest plea. I want you to help me now as you helped your foster-child Jesus, and as you have helped many others in the matter of housing. I wish to sell this [house/property] quickly, easily, and profitably and I implore you to grant my wish by bringing me a good buyer, one who is eager, compliant, and honest, and by letting nothing impede the rapid conclusion of the sale.

“Dear Saint Joseph, I know you would do this for me out of the goodness of your heart and in your own good time, but my need is very great now and so I must make you hurry on my behalf.

“Saint Joseph, I am going to place you in a difficult position with your head in darkness and you will suffer as our Lord suffered, until this [house/property] is sold. Then, Saint Joseph, I swear before the cross and God Almighty, that I will redeem you and you will receive my gratitude and a place of honor in my home.

At least, that’s the way the stories go. After you have closed on the house, you should thank St. Joseph by digging him up and taking him with you to your new home, where he should be put in a “place of honor.”

Obviously, the previous owners of our home didn’t follow all of the steps and left him behind. (I’m sure it’s purely a coincidence that a tree fell on their newly built home shortly after they moved.)

So, what does one do with a previously owned statue of St. Joseph? I put him in a place of honor in my house —my kitchen window! — and he lived there for the 16 years we owned the house. I intended to replant him in 2016, when we were getting ready to move to a new city, but I never had a chance — we had three offers on the house within 48 hours of it going on the market!

I like to think that St. Joseph was lending us a helping hand from his spot on the windowsill. On moving day, I put him in my purse and brought him to our new home two hours away. He’s back in the kitchen window, watching over my home, a good luck talisman who has earned his place of honor.

Interested in putting this tactic to the test? You can buy St. Joseph home sale kits for $5 to $10 in religious goods stores or online (even Amazon sells them!), so even if you’re a skeptic, it might be worth a shot. Here are a few options: