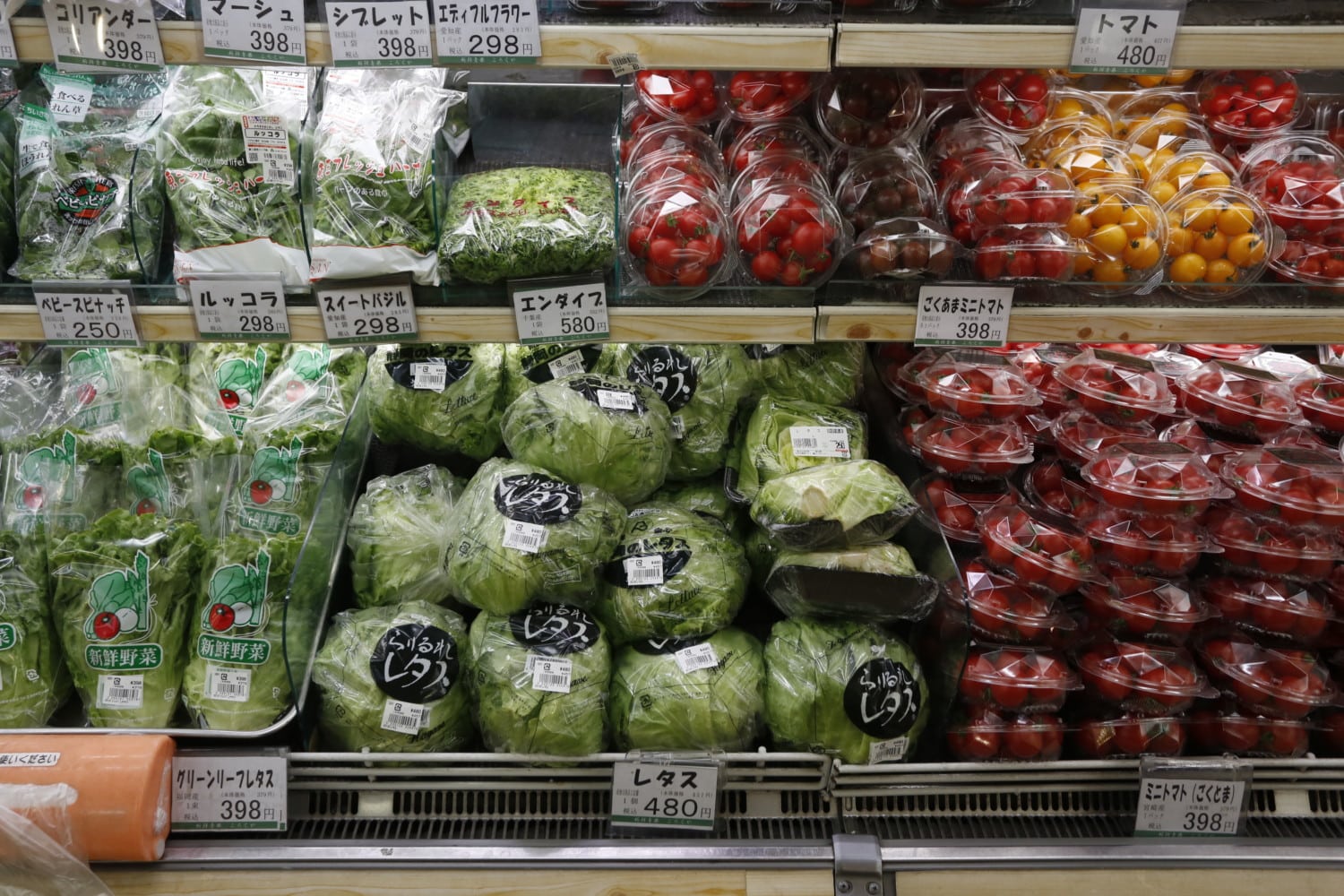 U.S. health officials are warning people to avoid certain foods due to ongoing unrelated outbreaks of intestinal infections caused by bacteria, viruses and even parasites lurking in some of our food.

Beyond Goldfish, here’s what to stay away from:

Hy-Vee, a Midwestern grocery store chain, has recalled a pasta salad that might be linked to at least 20 people getting sick from salmonella. Hy-Vee, based in Iowa, sold the 1-pound and 3-pound plastic containers of Spring Pasta Salad in eight states.

The states are Iowa, Minnesota, Nebraska and South Dakota — where the salmonella illnesses were reported — and Illinois, Missouri, Kansas and Wisconsin.

The product was produced between June 1 and July 13. The packages have expiration dates between June 22 and Aug. 3.

Symptoms of salmonella begin 12 to 72 hours after a person is infected and include diarrhea, fever and abdominal cramping. This can last about four to seven days, and most individuals recover without treatment. However, those who develop severe diarrhea may need to be hospitalized. Those who are very young, who are very old or who have compromised immune systems are most at risk for complications and severe cases of illness.

Salmonella is the culprit in 90 illnesses linked to raw turkey products, according to the Centers for Disease Control and Prevention and the U.S. Department of Agriculture.

The illnesses have been reported in 26 states since November. But health officials have not identified a brand, product or supplier as the source of the outbreak.

Patients who have been interviewed reported eating “different types and brands of turkey products purchased from many different locations. Two ill people lived in a household where raw turkey pet food was fed to pets,” the CDC said.

In addition, samples of raw turkey pet food, raw turkey products and live turkeys have tested positive for the outbreak strain of salmonella, which could mean the outbreak is “widespread in the turkey industry,” the CDC said.

Put down the fork and step away from cut melon or fruit salad mixes that contain it.

The U.S. Food and Drug Administration is warning people in 23 states that the fruit may be contaminated with salmonella.

The outbreak has affected 60 people mostly in five Midwestern states, with about half of them hospitalized.

The fruits were sold in stores such as Walmart, Kroger, Walgreens, Sprouts Farmers Market, Costco and Whole Foods/Amazon.

Federal health officials want you to toss out all boxes of Kellogg’s Honey Smacks. The warning is due to an outbreak of salmonella that has left 100 people sick in 33 states.

The cereal was recalled June 14, but one month later, another warning not to eat the cereal was issued after the FDA said it was aware that it was still available.

“Retailers cannot legally offer the cereal for sale and consumers should not purchase Kellogg’s Honey Smacks cereal,” the agency said.

Flowers Foods announced a recall of Swiss rolls because they may be contaminated with salmonella. The ingredient whey powder was recalled for possible contamination. There have been no reports of illness from Swiss rolls, according to the company.

Mondelēz Global LLC announced a voluntary recall of certain Ritz Cracker Sandwiches and other Ritz Bits products because they contain whey powder that has been recalled for possible salmonella contamination. The products are available nationwide.

The voluntary recall is a precaution, as no complaints of illness have been reported, the company said.

As a precaution, McDonald’s has stopped selling salads in 3,000 locations in 14 states to try to contain an outbreak of cyclospora illness.

To date, 395 cases have been confirmed in 10 states since May 1, according to the CDC.

Now, it’s possible the parasite may have affected certain Trader Joe’s, Walgreens and Kroger products as well, according to the USDA.

The cyclospora parasite causes intestinal illness as a result of consuming contaminated food or water. Symptoms can begin a week or more after consuming the parasite. They include diarrhea and frequent, sometimes explosive bowel movements, according to the CDC. Those who are infected might also experience loss of appetite, weight loss, stomach cramps or pain, nausea, gas and fatigue. Vomiting, headache, fever, body aches and flu-like symptoms can also occur.

Before you grab something off that vegetable tray, make sure it hasn’t been recalled.

The FDA is investigating at least 237 cases of cyclospora illnesses linked to recalled Del Monte Fresh vegetable trays. The trays contained broccoli, cauliflower, carrots and dill dip, and they were sold in Iowa, Minnesota, Wisconsin, Illinois and Indiana.

“FDA has not identified which of the ingredients is the vehicle for this outbreak; each component of these vegetable trays is under consideration,” the agency said.

Avoid eating fresh crab meat from Venezuela. That’s the advice from the FDA due to an outbreak of Vibrio parahaemolyticus that started in April. In all, 12 illnesses have been reported in Maryland, Pennsylvania, Louisiana and the District of Columbia.

“This product is commonly found in plastic tubs and may be labeled as ‘pre-cooked,’ ” the FDA said in its outbreak announcement.

Written by Faith Karimi and Debra Goldschmidt for CNN.