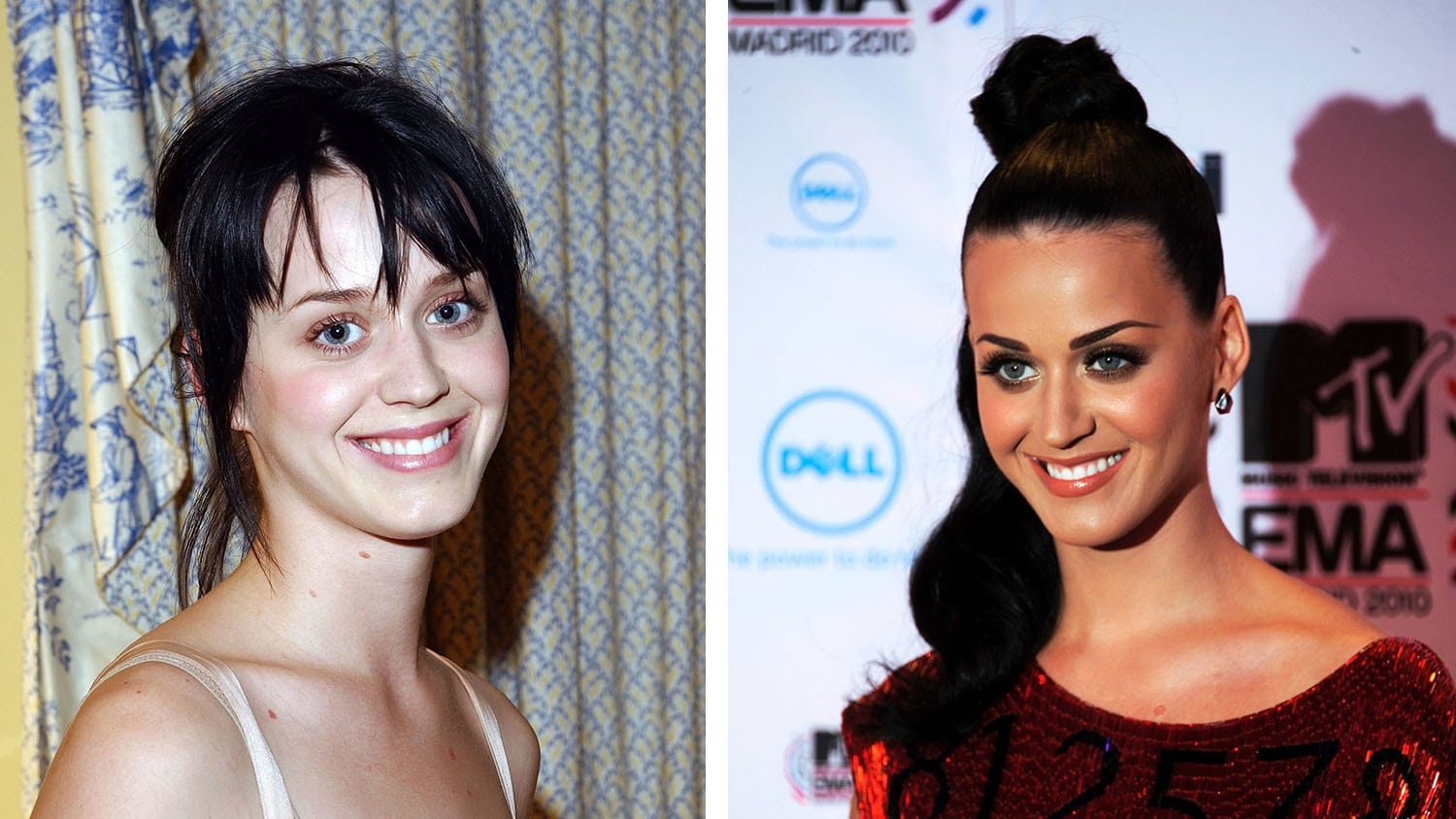 Since rocketing to fame in 2008 with the song “I Kissed A Girl,” singer Katy Perry has become a mainstay of American pop culture. Although some less-savvy pop stars have disappeared after one or two hits, Perry has remained in the public conscious for the last 10 years with four albums, appearances on TV shows like “American Idol,” countless magazine covers, and even her own movie.

From her beginnings as a gospel singer to her high-profile relationships with fellow celebrities, here are some interesting facts you may not know about Katy Perry.

Although she recorded her first album under the name “Katy Hudson” in 2001, the singer adopted the moniker “Katy Perry” for future albums. Reportedly, she did so in order to avoid confusion with the actress Kate Hudson. Perry is her mother’s maiden name.

Perry is known for changing her hair color frequently, so you might be surprised to find out that the singer’s original hair color is a light to medium brown.

“I’m naturally the most boring dishwater squirrel brown … So I’ve been playing with colors since I was 15,” she told Glamour.

In an interview with Vogue, Perry described herself as an “amusement park junkie” and she has a particular fondness for Disneyland. She is a member of Disneyland’s exclusive Club 33, a VIP-only restaurant and club. She has also proven herself to be a true Disney-lover by dressing up as characters like Cinderella, Snow White and Minnie Mouse in the past.

Unlike some starlets, Perry loves to eat — and she is not afraid to eat on camera. Some of the singer’s favorite foods include Chinese chicken salad, crispy beef, and yellowtail sashimi. She also reportedly loves to snack on Ritz crackers, according to “American Idol” co-star Luke Bryan, and once released a recipe for the “World’s Best Cherry Pie.”

She Wears A Uniform To Discourage The Paparazzi

When she’s performing onstage or walking a red carpet, Katy Perry is known for wearing extravagant clothing. However, in her normal life, the singer often wears the same Adidas tracksuit every time she leaves her home to discourage the paparazzi from taking her photo. (Supposedly, wearing the same outfit all the time makes the pictures less interesting and sellable.)

As a kid, Perry had a crush on teen idol Jonathan Taylor Thomas, who starred on the ’90s TV show “Home Improvement.” It seems like the torch she carried for him hasn’t dimmed — even as an adult — because in 2009, the singer tweeted, “where [in] the world is Jonathan Taylor Thomas. I loved you JTT.”

Contrary To Rumors, Scarlett Johansson Was Not Perry’s Muse

Although internet rumors often point to actress Scarlett Johansson as being the inspiration behind Perry’s song, “I Kissed A Girl,” the singer has revealed that the tune is actually about a girl she met when she was 17. The singer claims that she has never kissed Johansson, and Miley Cyrus apparently thinks the song is about her.

She Has Never Won A Grammy

Despite 13 nominations, Perry has never won a Grammy Award. However, the singer doesn’t seem to think awards matter.

She Dropped Out Of High School

At the age of 15, Perry dropped out of school in order to focus on singing. However, it’s a decision she now regrets.

“I’m kind of bummed at this stage that I didn’t have a great education because I could really use that these days,” she told Yahoo in 2014.

Perry has two siblings, a younger brother named David (pictured below) and an older sister, Angela.

“We are like the Three Musketeers — actually the Three Stooges,” she said of them in an interview with Harper’s Bazaar. “I feel really blessed because of where I come from.”

She Believes In Aliens

“I believe in aliens,” Perry told GQ in 2014. “I look up into the stars and I imagine: How self-important are we to think that we are the only life-form? I mean, if my relationship with Obama gets any better, I’m going to ask him that question. It just hasn’t been appropriate yet.”

She Has Several Pets

The singer reportedly loves chicken nuggets so much that she named one of her pets “Nugget.” Nugget is a teacup poodle who makes frequent appearances on Perry’s Instagram and even starred in a Citibank commercial alongside her owner in 2017. Perry also reportedly has a dog named Butters, as well as a cat named Kitty Purry.

Perry has a number of tattoos, including ones that represent every tour she’s done. On her ankles, she has a strawberry, cherry blossom and a peppermint. She also has a “Jesus” tattoo on her wrist.

Her Parents Were Evangelical Christian Pastors

As the daughter of evangelical Christian pastors, Perry has revealed that her parents don’t agree with some of the things she does. Despite this, she is still close to them and even threw them a 70th birthday party. She’s also very close with her grandmother, whom she took to the premiere of “Smurfs 2.”

She Is A Native Californian

Perry grew up in Santa Barbara, California (hence, the song “California Gurls”). She still spends time in her hometown and has said that she likes to write songs there.

“I make a lot of music there ‘cause it’s only an hour and fifteen minutes away from L.A. at the right times and the energy level is so dramatically different — people, priorities, community, connection,” she told WWD.

She Doesn’t Stay Single For Long

Perry has had high-profile relationships with fellow celebrities like Russell Brand, John Mayer and Orlando Bloom, and claims that she doesn’t stay single for long.

“I carry a lot of rose quartz, which attracts the male. Maybe I need to calm it down with amethyst,” she said in a 2014 interview with Cosmopolitan.

She Likes To Sing In The Shower

The singer revealed that she likes to belt out songs while in the shower.

“I make up songs. Or I go, ‘I like to move it, move it’ … I’ve had several sing-offs with boyfriends. That’s very fun — singing in the shower and scrubbing!” she revealed to W Magazine.

Back in 2001, the singer released her first album under the name “Katy Hudson.” However, the Christian music album reportedly only sold around 200 copies. She went on to rebrand herself as Katy Perry and release the secular album “One of the Boys” in 2008.

She was introduced to transcendental meditation by her ex-husband Russell Brand.

“It has helped a lot with my anxiety,” she said of the practice during a health conference at Vatican City. “Instead of having to turn to prescription [drugs] I’ve been able to turn to this.”

Fashion-lover Perry has said that if she hadn’t pursued music as a career, she might have become a stylist instead.

“I love creating looks; I do it with all my girlfriends,” she told People.

She Found Out She Was Getting Divorced Via Text Message

Perry’s short marriage to Russell Brand reportedly ended when he sent her a text announcing his plans to divorce her.

“He’s a very smart man, and I was in love with him when I married him,” she said in an interview with Vogue. “Let’s just say I haven’t heard from him since he texted me saying he was divorcing me Dec. 31, 2011.”

She Helped Deliver Her Sister’s Baby

Not only is she a talented performer, but Perry also has some skills as a midwife. She reportedly helped deliver her sister’s baby.

“Finally you can add ‘helps delivers babies in living rooms’ to my resume! It’s been a miracle of a day,” she tweeted in 2014.

She Keeps Up With The Kardashians

The singer is reportedly close to the Kardashian family and told “Entertainment Tonight” in 2015 that Kris Jenner is “very important” to her. She has also posed for photos with Kim Kardashian.

Although the singer taped a duet of her song “Hot N Cold” with Elmo on the children’s show “Sesame Street” in 2012, the segment never aired. Reportedly, parents felt that the outfit Perry wore in the publicly released clip was too revealing, and the show’s producers pulled the song from the episode.

She Writes Songs For Other Pop Stars

Not only she is a successful recording artist in her own right, but Perry has also written songs for other singers, like Britney Spears, Nicki Minaj and Selena Gomez. Notably, she wrote Kelly Clarkson’s “I Do Not Hook Up,” though you can still hear her own version of the song online.

She Got Into A Legal Battle With Nuns

The singer’s plans to convert a Los Angeles convent into a residence resulted in a legal battle with the nuns who formerly lived on the property. (The nuns stated that it would be a “sin” to sell the property to her.) Perry ended up reaching a settlement in her favor in 2018.

She Has Her Own Barbie Doll

In 2011, Perry teamed up with Mattel to create a Barbie doll in her image. The doll, which had blue hair and a cupcake dress, was auctioned off for charity.

Her Fans Have Given Themselves A Cute Nickname

Perry has a devoted fan base (including a surprising number in the Utah area). Her fans refer to themselves as “KatyCats,” a nod to Perry’s love of cats.

She Is The First Woman To Land 5 No. 1 Hits From A Single Record

In 2011, Perry became the first woman to have five songs from an album reach No. 1 on the Billboard Hot 100 chart. (The songs were all from her “Teenage Dream” album.) She is the second artist to have achieved this honor, behind Michael Jackson.

Conspiracy Theorists Have A Strange Theory About Katy Perry

Some conspiracy theorists are convinced that Perry is not who she says she is. Instead, they believe that she is actually JonBenét Ramsey, the child beauty pageant contestant whose murder in 1996 made national headlines. However, there is no actual evidence to prove this.