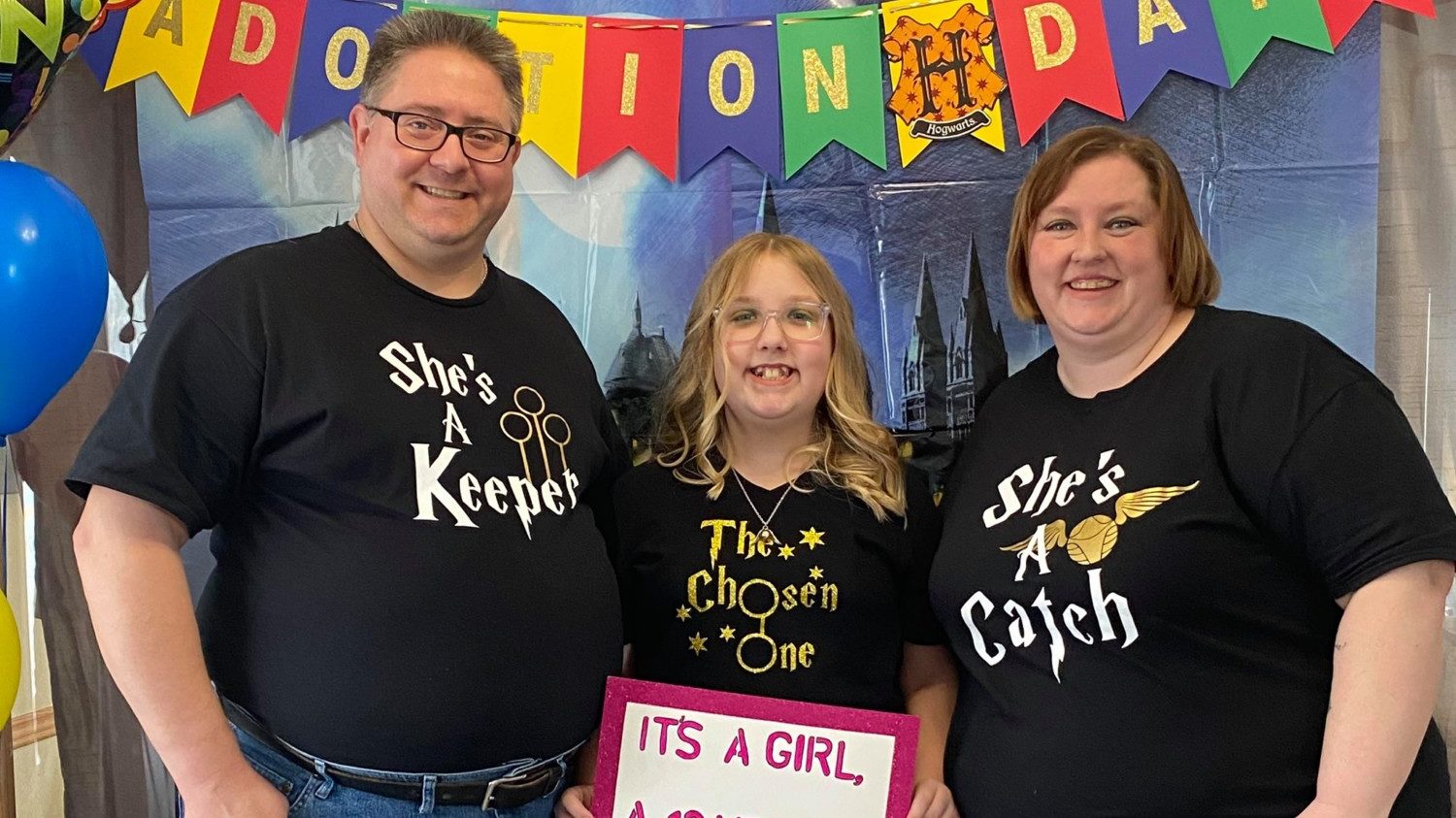 Ever since gender reveals became popular, they’ve been customized for different families. Some are over-the-top. Some surprise family and friends with the announcement of multiple babies. Others have been gender reveal do-overs to honor their children’s gender identities. Foster parents Dan and Charlette Fontaine from Manitoba, Canada, took to TikTok to share the uniquely special gender reveal of their family’s newest addition.

In the video, the couple is wearing black, Harry Potter-themed t-shirts that hint at the contents of the black balloon Charlette is holding. Dan’s shirt says, “She’s a keeper,” and Charlette’s tee states, “She’s a catch.”

“I wonder what it is,” Charlette ponders when suddenly a bubbly, blonde, bespectacled tween wearing a shirt much like the “expectant” parents rushes into the room and pops the balloon. Pink confetti pours out of the balloon, and the young girl yells, “It’s a 12-year-old girl.”

The girl, whose name is Bianca, holds a sign reading, “It’s a girl, a 12-year-old girl” in pink lettering. Her shirt announces that she is “The Chosen One.”

“Adoption Day,” Charlette announced on the TikTok video. “We finally got to adoption [sic] our beautiful foster daughter after 1240days in care!”

Adoption Day!! We finally got to adoption our beautiful foster daughter after 1240days in care! #adoption #newmom #itsagirl🎀

The Fontaines had no plans to take in an older child when they began the adoption process. They thought they would welcome a baby into their home. However, learning about kids in foster care touched their hearts and changed their minds.

“We had to take adoption classes, and what really stuck with me in the adoption class was that sometimes kids over the age of two are classified as ‘unadoptable’ because nobody really wants a child that’s not a baby,” Charlette told BuzzFeed. “And that statement there has stuck with me and it broke my heart.”

Then, on a trip to Niagara Falls, the couple tossed a coin into the water and told one another they might get a call for a child who needed them. The next day, they received a call about then eight-year-old Bianca. Now, years later, the Fontaines have used their collective love for all things Hogwarts to announce their new daughter’s adoption, and it’s the perfect viral gender reveal.

According to the most recent data, more than 400,000 children are in foster care in the United States. More than a quarter of those kids are looking for forever families. The median age of children entering foster care is about six years old. Every year, thousands of kids age out of foster care without being adopted. If you’d like to learn more about becoming a foster or adoptive parent, the Children’s Bureau, an Office of the Administration for Children & Families, provides a portal for state foster care information websites.