When’s the last time you did something nice for a stranger? Liam Murphy, from Cork, Ireland, did on August 16th, when he took his Dubai cab driver to an amusement park.

Murphy, a test engineer, was on a business trip in the United Arab Emirates, but decided to spend his Sunday at Ferrari World, an indoor theme park.

When he found out that his taxi driver, Shakiha, had never been to the park—in his 14 years living in the area!—and planned on waiting in the cab—for four hours(!!)—Murphy asked Shakiha to tag along.

Murphy bought him a ticket (approximately $68) and that was that.

“When I asked him what he would do when I am in the park for four hours, he said he normally just waits in the car,” Murphy told Emirates 24/7. “And I thought to myself, the price of the ticket is not that much [starts at Dh250] so why don’t I just bring him along.”

“Got a taxi from Dubai to Abu Dhabi today. Indian taxi driver living here 14 yrs yet was never in Ferrari World. He was going to wait in the car for 4 hrs. Today I made his dreams come true for the laugh….‘I will pray God for you sir’….some craic with the hoore all day. His first ever roller coaster ride was on the fastest in the world. ‘I do not feel well sir’. Shakiha will sleep well tonight [sic].”

The first roller coaster they rode was the Formula Rossa, the fastest in the world, which goes up to 240 kilometers per hour and from 0 to 100km/h in two seconds. When Murphy was asked if Shakiha liked it, Murphy said to Emirates 24/7, “He refused to go on it again.” (Do you blame him?! Though pretty impressive, right?) 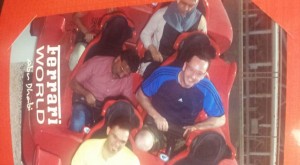 The men continued going on more rides, like the Fiorano GT Challenge (whose cars resemble the Ferrari F430 Spider) and had their picture taken along the way.  “I was going to get him a copy of the pictures we took there but he refused,” Murphy said. “I guess he didn’t see the value in it.”

“He was great entertainment,” Murphy said to BuzzFeed. I bought him some pizza on the way home. His family is in India and he said he sends money home each month. I felt sorry for him.”

If only there were more Murphy types in the world, it would be a better place. Hopefully, though, it’ll encourage you to pay it forward and do something nice and unexpected for someone you come across, cab driver or not.