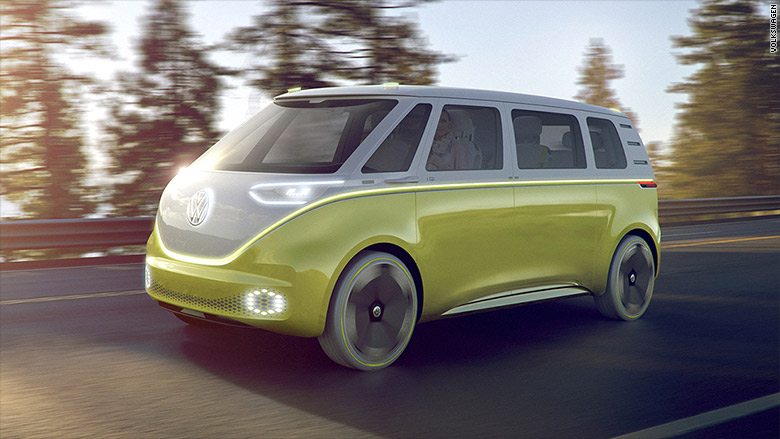 The classic Volkswagen Bus made a big comeback at the 2017 Detroit Auto Show.

Known as the “I.D. Buzz”—a play on the original bus name—the updated microbus features many bells and whistles to bring this retro favorite into the 21st century.

Because of the 369-horsepower engine, the new Microbus can go from zero to 60 miles per hour in five seconds. However, its top speed will be limited to 99 miles an hour.

The electric motor is part of a new company policy to lower emissions. Recently, Volkswagen agreed to promote electric cars after being found responsible for altering emission testing results.

As a result, Volkswagen created the “I.D. Buzz.”

A New Interpretation Of A Classic

The classic VW Bus is an icon of American transportation, a symbol of the 1960s and 1970s. Remember these?

The new I.D. Buzz is a “new interpretation” of the classic model.

For example, one obvious feature is the familiar front end with its characteristic “V” and likeable “face.” Designers kept the spirit of the design, but updated it.

“Instead of the round headlights used in the original model, in designing the I.D. BUZZ we opted for slender LED systems, which not only turn night into day, but also interactively communicate with other road users and pedestrians,” said Oliver Stefani, Head of Volkswagen Exterior Design, in a media statement.

When Can You Get A New Volkswagen Bus?

Volkswagen did not give a specific launch date for its newest microbus. However, a company executive hinted at 2020 for a possible debut.

“That is when we will be launching an entirely new generation of fully connected, all-electric vehicles to the market. By 2025 we want to be selling one million of these vehicles annually. We are making electric mobility the new trademark of Volkswagen.”