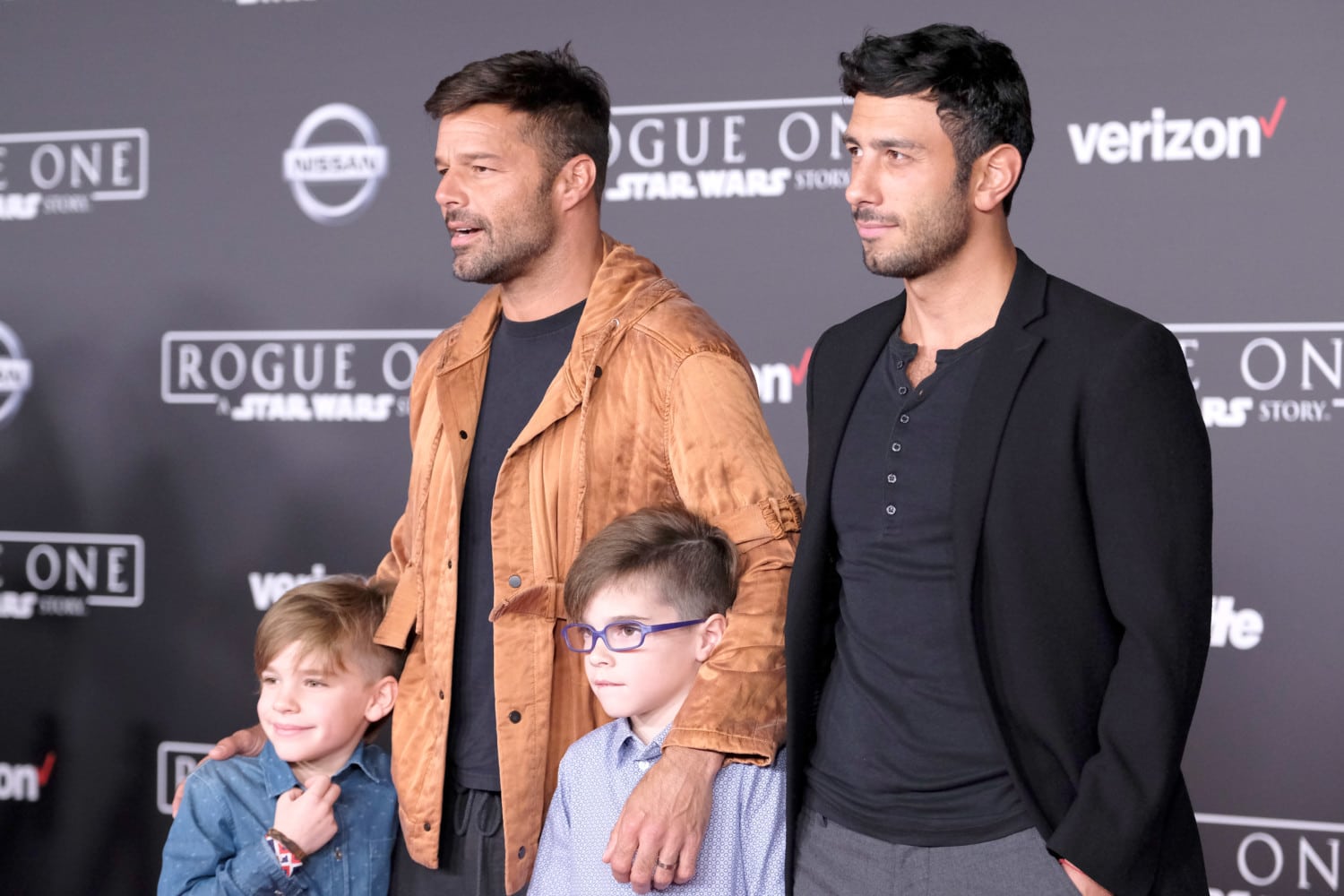 As of the latest U.S. data available, about 3.4 percent of all moms will give birth to twins (the chance of having twins is higher if fertility treatments are involved). Meanwhile, one enterprising writer put the odds of becoming even relatively famous at about 1 in 62,986.

So twins born to celebrity parents?! They are quite the rare gems indeed. Keep reading to find out all the celebrities who are parents of twins.

I know we’re all still dealing with the fallout from their split, but these super-parents were the twin trendsetters of the decade. Vivienne and Knox were born in 2008, joining the four other Jolie-Pitt kids: Maddox, Zahara, Shiloh and Pax.

Maybe having twins is the secret to relationship longevity (okay, except for Brangelina). SJP and Broderick, who have been married for 20 years, had twin girls Tabitha and Marion in 2009. The couple also has an older son, James.

Kim and Diddy have four children together, including twin girls Jessie and D’Lila and boys Quincy and Christian. The on-again, off-again couple isn’t an item anymore, but they still spend time together and have even taken family vacations together.

Yes, NPH’s life is just as charming in reality as it is on TV, and his kids are a major reason why. The couple became parents in 2010, when twins Gideon and Harper were born. The fashionable pair show up regularly on NPH’s Instagram account.

Everyone’s favorite sci-fi/fantasy heroine somehow found time in her busy schedule to give birth to twin boys in 2014 (another son, Zen, followed in 2017). The family stepped out for a rare public appearance together when Saldana received her star on the Hollywood Walk of Fame in May 2018.

Meet Emme and Maximilian, the twins of superstars J Lo and Marc Anthony, who were born in 2008. With those genes, these kids can probably already sing better than any of us—in both languages!

Even though they’ve separated, Carey and Cannon are raising their twins, Monroe and Moroccan, as a team.

This super-hero family includes twins Tristan and Sasha, born in 2014, and an older sister, India Rose, born in 2012. Pataky shared this sweet snap of the twin brothers on Instagram.

Madonna is such a force to be reckoned with, she counts as her own couple. She’s also a super-mom — in 2017, her family grew again when she adopted 4-year-old twin sisters from Malawi. Esther and Stella join four older siblings: Lourdes, Rocco, David and Mercy.

The Canadian diva and her husband, who passed away last year, had twin boys, Eddy and Nelson, in 2010.

Another point for the twins = happy marriage theory. The “Back to the Future” actor and wife Pollan have been married for 29 years and have four children: twin daughters Aquinnah and Schuyler, older brother Sam and little sister Esmé.

Romijn and O’Connell have 8-year-old twins, Dolly and Charlie, who are just as photogenic as their mom.

The CW’s power couple (Jensen Ackles stars in “Supernatural” and Danneel was on the beloved “One Tree Hill”) had twins Zeppelin and Arrow in December 2016. The couple also has an older daughter, Justice Jay, who was born in 2013.

Beyoncé and Jay-Z welcomed their twins, Sir and Rumi, in June of 2017, much to the BeyHive’s excitement. The power couple then waited a month to introduce their babies in an iconic Instagram photo. Queen Bey and Jay-Z are also parents to Blue Ivy, who was born in 2012.

Chef Gordon Ramsay and his wife, Tana, are parents to four children: 19-year-old Megan, 15-year-old Matilda, and twins Holly and Jack, who turned 18 in January 2018. The twin siblings celebrated their milestone birthday with a “Great Gatsby”-themed party, and Ramsay couldn’t help sharing a sweet snap of the occasion on Instagram. “Gorgeous at 18…. so happy and proud for these 2,” the Michelin-star chef wrote in the caption. “Continue working hard to follow your dreams love ya both, now can we rent out your rooms please ?”

Singer and actor Ricky Martin and husband Jwan Yosef are dads to brothers, Valentino and Matteo. The fraternal twin boys were born via surrogate in August 2008.

“My kids ask me about having two daddies and I tell them we are a part of a modern family,” Martin told Out in January. “This is a beautiful sense of freedom.”

“I’m constantly amazed by their insight and their observations,” Dempsey said about his kids in a 2016 interview with People.

“The coolest thing you can do for your children is to love each other in their presence,” Roberts told Allure in 2009. “I’m the luckiest girl in town, I really am.”

Like their parents, Olivia and Malcolm are pursuing entertainment careers. Malcolm has a background in film and graduated in 2016 from the American Film Institute Conservatory, while Olivia has starred in movies and on television, and made her off-Broadway debut in 2015.

The actor and human rights lawyer welcomed twins Alexander and Ella in 2017.

Angela Bassett And Courtney B. Vance

Actors Angela Bassett and Courtney B. Vance are parents to 12-year-old fraternal twins, Bronwyn and Slater. The actors, who have been married for more than 20 years, welcomed their two children in January 2006 via a surrogate.

“I had a dream about seven years ago that we were going to have twins,” Vance revealed on “The Oprah Show” at the time of their birth. “I didn’t know how it was going to happen.”

Former “True Blood” stars and real-life couple Anna Paquin and Stephen Moyer are parents to 5-year-old twins Poppy and Charlie — but don’t expect to see their little ones in the spotlight.

“Everyone chooses what works for their family. There are aspects of one’s private life that are fun and cute and not too revealing,” Paquin told “Today” earlier this year. “And then there’s stuff where you’re making decisions for people who don’t have a say yet about whether they want to be in the public eye.”

Actor Tilda Swinton is mom to 10-year-old twins Xavier and Honor, whom she had with former partner John Byrne. And here’s a funny parenting story for you: George Clooney, who welcomed his own set of twins last year, used to laugh at Swinton for “looking so tired when the twins were small,” Swinton told Us Weekly last year. “[N]ow I have the last laugh,” she added.

Singer Enrique Iglesias and former tennis pro Anna Kournikova expanded their family by two last year. The couple, who have been together for 16 years, welcomed their first children, twins Nicholas and Lucy, in December 2017. The births came as a shock to many fans as Iglesias and Kournikova managed to keep the pregnancy private the entire time.

Iconic star Al Pacino shares 17-year-old twins Anton and Olivia D’Angelo with his ex-partner, Beverly D’Angelo. Pacino and D’Angelo separated when the twins were young and went through a tough custody battle. But the two actors have become friends and co-parent their children.

“Tom was dancing with Eden,” Cross told People shortly after her daughters were born. “We put on some Tchaikovsky and they were dancing to ‘Swan Lake.’ That was just … so beautiful.”

Oscar winner Holly Hunter welcomed twin boys, Claude and Press, with her longtime partner, British actor Gordon MacDonald, in January 2006. Hunter had her sons later in life, at the age of 47.

“Nothing makes me happier than seeing my kids smile and laugh,” Chambers told Us Weekly last year.

Geena Davis gave birth to her twin boys, Kian William and Kaiis Steven, in May 2010. She shares her sons with ex-partner Reza Jarrahy. They also have a daughter, Alizeh Keshvar, who was born in 2002.