Being a parent isn’t easy, especially when you’re a single dad trying to style your daughter’s hair. Should it be up or down? Bow or no bow? How do I get these knots out?! And how do I make a braid?!

Philippe Morgese, a single dad from Daytona, FL, mastered doing his daughter Emma’s hair. He told Buzzfeed, “I love the time spent with her and she loves the cool hair, so it’s a win-win,” he said. 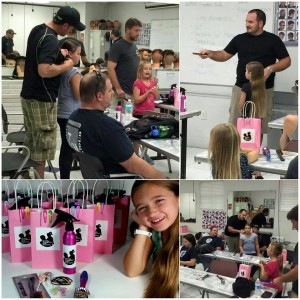 He decided to share his knowledge with other dads by having a “Dads and Daughters” hair class. (Aww.) Apparently, dads would notice Emma’s hair and ask him for tips. “I thought it would be easier to show them in person,” he said.

He asked a local beauty school, International Academy, if he could teach the class there and started posting about it on Facebook. And he didn’t charge for the class. “I didn’t want any cost to anybody—I didn’t want to stop anyone from learning,” he said to Buzzfeed.

Seven dads and daughters attended the class. In it, the dads learned brushing tips, we well as how to do some styling (like buns).

“I created a Dads and Daughters hair class to help other fathers learn about doing hair. We had a small class full of dads that learned basic brushing, ponytails, braids and buns. The turnout was great! I’m so proud of these dads for stepping up…” —Philippe Morgese on Imgur

As far as the “Dads and Daughters” class, Reddit forum commentators shared their stories about being dads and trying to master things such as braiding their daughters’ hair. Here’s a few funny quotes:

Aww. And on that note, we can see the value in dads doing their daughters’ hair. Morgese plans on holding more “Dads and Daughters” hair classes. He wants to keep them small enough so people will get individualized help and attention. I know that if I were a dad, I’d sign up. “I feel like the kudos have made me a better dad,” Morgese said to Buzzfeed. “When you hear ‘you are such an awesome dad,’ you start to believe it and let go of the mistakes you make as a parent.”

He also set up a Facebook page: Daddy Daughter Hair Factory, so you can keep up on future classes and styling tips.

Here are some funny photos of dads NOT in Morgese’s class on what NOT to do.