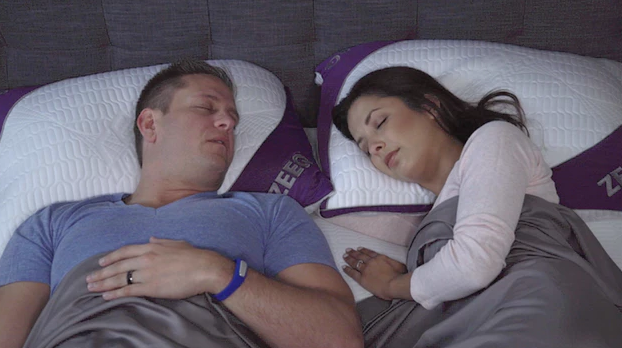 If you thought a pillow was just for propping your head up at night (and also just kind of comfy), well, you were mistaken.

Apparently, it can be so much more than that.

The ZEEQ pillow is the latest piece of sleep-technology to hit the market.

Well, almost, it’s still in the Kickstarter funding phase at the moment.

But, it could be yours soon!

Let me tell you all about what this baby can do: It has built in speakers that play music so only you can hear it.

It has a microphone that picks up snoring and vibrates to prompt you to turn to a new position.

And it will monitor your motion as you sleep and deliver a sleep report to an app for you to analyze in the morning.

So, as you’re stretching and waking up each morning, what will you have to thank for your good night’s rest?

If this pillow is really as good as it claims to be, you could be well on your way to less snoring and a more peaceful sleep for you and your partner.

RELATED: There’s A Headband That Could Help You Fall Asleep And Stay Asleep Through The Night

However, being well-rested is also a bit pricey. According to Huffington Post, this will retail for $300.

But, if you pledge on Kickstarter now, you can score one for only 99 bucks.

That’s still not cheap for a pillow. But, hey, this isn’t just any pillow.

It’s all in the name of a better sleep, you know?

Cover Clamp To The Rescue

There’s seems to be one in every couple.

At the beginning of the night, you both fall asleep, warm and toasty underneath your quilt or comforter.

But a few hours later, one of you is still snuggled up while the other’s teeth are chattering.

Well, someone got tired of sleeping with a blanket stealer and invented the Cover Clamp, a spring clamp with a rubber grip that holds blankets and sheets in place through the night.

“My wife, who is the cover hog in our family, certainly doesn’t mean to do it (or at least that is what she says). So it’s not like I can just talk to her about it and hope she sees the error of her ways,” says Cover Clamp founder Chris White.

Though cover-stealing is an “age-old” problem, White points out that few solutions have emerged to solve it.

Here’s how it works: Attach the Cover Clamp to the blankets on the side of the non-stealer (the person who ends up freezing halfway through the night).

You can tie the clamp’s strap to the bed frame directly or attach it to a grip pad that goes under your mattress.

Because most people are stealing the covers unconsciously while they sleep, the clamp’s makers say that the device is successful because it reduces the slack available to the person.

“When they feel strong resistance when they unconsciously pull, they don’t pull as much, or as hard, as before,” according to the Cover Clamp website.

It can also hold the covers in place for people who toss and turn at night.

The makers of the clamp are so confident that it will help keep you warm that they’re offering a money-back guarantee if it doesn’t work.

The clamp, which has a two-inch opening, can withstand up to 50 pounds of force.