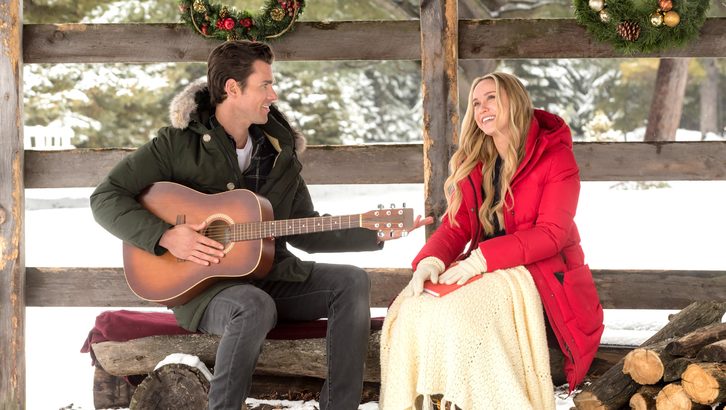 Hallmark Christmas movies are my favorite thing about the holiday season. Yes, they’re cheesy. Yes, the plots are often extremely predictable. But honestly, that’s kind of what makes them great.

There’s just something so comforting about snuggling up on the couch with a mug of hot cocoa and watching a Hallmark Christmas movie. You know the film will have a happy ending, so it’s the perfect way to de-stress and escape for a little while during the hectic holiday season.

This year, Hallmark Channel and Hallmark Movies & Mysteries are upping the ante with plans to show a whopping 34 new Christmas movies in 2018, Entertainment Weekly reported.

Woah! That’s a whole lot of Christmas cheer. Last year, the two channels debuted 33 flicks, so they’ve really outdone themselves with their ambitious plans for 2018!

It all starts on October 27 (before Halloween!) when the Countdown to Christmas starts on the Hallmark Channel, which will show 22 of the new movies. The other 12 movies will be shown on Hallmark Movies & Mysteries, which will start their Most Wonderful Movies of Christmas on November 4.

We don’t know much yet about the upcoming flicks, but we do know Danica McKellar from “The Wonder Years” will star in one Hallmark movie. Last year, McKellar appeared in the their flick “Coming Home For Christmas.”

Another new movie, called “Vet,” will star Kellie Martin. Not much is known about that film, but Hallmark described it as “an emotional story of heroism and homecoming.”

Surely, we don’t need to tell you this, but people who love Hallmark Christmas movies really get into them. In 2016, one woman came up with a brilliant Hallmark Christmas Movie Drinking Game to make the whole experience even more fun. She posted her rules on Facebook, and people thought it was pretty hilarious:

Players must take a drink whenever certain things happen in the movie, and if you’re a fan of the genre, you’ll LOL in recognition. For example, some well-worn themes are characters engaging in a snowball fight or ice skating, a big city person who is transplanted to a small town and the sound of jingle bells. As you can imagine, this game will have you drinking a lot, so pace yourself!

If you take your Hallmark Christmas-movie watching very seriously, then you’ll want to get in on the network’s Merry Madness Christmas Bracket. You choose your favorite of several pairs of movies, and compete with other viewers for a chance to win prizes. The ultimate winner will take home $10,000.

Do you plan to catch all 34 of the new additions this year? I’m going to try!

RELATED: This homemade popcorn is the perfect snack to kick back and watch a Hallmark marathon!